Mass in celebration of the 30th Olympiad 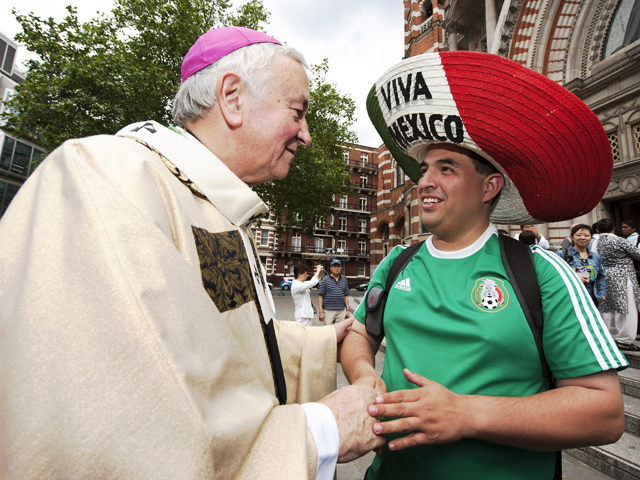 “Use your body for the glory of God”, is the message shared by Archbishop Vincent Nichols at a Mass to give thanks for the Olympic Games, celebrated at Westminster Cathedral on Saturday 28 July.

Picking up on the central theme of this year’s Day for Life Sunday celebrated by the Catholic Church, the Archbishop reminded the congregation that our bodies are temples of the Holy Spirit, enhancing the deepest meaning of the achievements of sport, that of giving “glory to their Maker. “

Speaking of the high ideals held up by the Olympic Games the Archbishop referred to fairness in competition, friendship between adversaries, individual achievement and national pride. He also spoke of how these ideals, in order to be effective, need to be put into practice. Part of doing so involves what Blessed John Paul II said to competitors in the 1985 European Games for the Blind. Quoting Pope John Paul II, he said “Your sporting achievements are a sign of your great human capabilities. You do not allow yourselves to be overcome by difficulties but are determined to conquer them. In this you show courage and great gifts of mind and will.”

In his homily, Archbishop Nichols reflected on the 100 Days of Peace and the programmes and activities throughout the Church that took place around it. He said that “Schools explored training for peace just as athletes were training for the competitions. The classic virtues of temperance, fortitude, justice and courage were explored as the foundation of true human achievement, whether in citizenship or sport.”

Archbishop Nichols said that the recent establishment in this country of the John Paul II Foundation for Sport, launched by Pope Benedict XVI during his visit to the UK in 2010, can be “the vehicle through which our Catholic community can help our society build a legacy worthy of these Games.”

The Archbishop reminded the congregation  “let us also reawaken in ourselves the belief that our bodies too are always of beauty in the eyes of God and are destined to rise again to eternal life, at the  moment to come, when all is made new in the power of God in Christ Jesus our Lord.”

Preceding his homily Archbishop Vincent Nichols read a message from the Holy Father Pope Benedict XVI for the 2012 Olympic Games given during his Angelus Address in Rome on 22 July 2012.

Message from the Holy Father for the 2012 Olympic Games