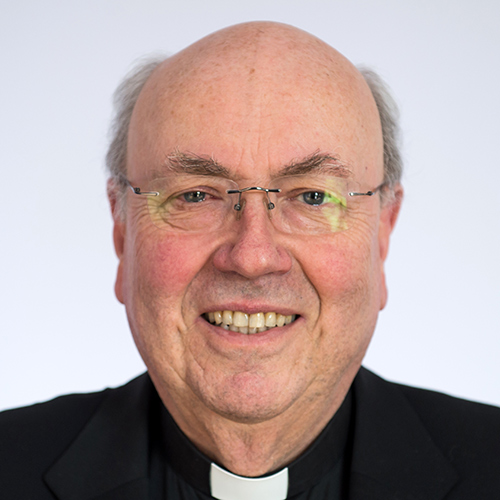 A profile of the Catholic Archbishop of Liverpool, the Most Reverend Malcolm McMahon OP.

The Most Reverend Malcolm Patrick McMahon OP was born and brought up in London, the second of three brothers. When he left school, he studied mechanical engineering at the University of Manchester Institute of Science and Technology. He then worked in the transport industry before joining the Order of Preachers (Dominicans) in 1976.

He made his religious profession in 1977, and studied philosophy at Blackfriars, Oxford and theology at Heythrop College, London. He was ordained to the priesthood by Cardinal Basil Hume on 26 June 1982.

He lived in Holy Cross Priory, Leicester between 1984 and 1985, during which time he served as Catholic Chaplain to Leicester Polytechnic (now De Montfort University), before moving to St Dominic’s, Haverstock Hill, in north London.  He later served as Parish Priest of St Dominic’s, Newcastle-upon-Tyne before returning to St Dominic’s, Haverstock Hill as parish priest.  In 1992, he was elected Prior Provincial of the English Province of the Order of Preachers; having served for two terms as Prior Provincial, in 2000 he was elected Prior of Blackfriars, Oxford.

On 7 November 2000, Pope John Paul II appointed him ninth Bishop of Nottingham, and he was ordained to the episcopate by Bishop James McGuinness in St Barnabas’ Cathedral, Nottingham on 8 December 2000.

It was announced that Archbishop-Elect McMahon had been appointed ninth Archbishop of Liverpool on Friday 21 March 2014.  He was installed as Archbishop on Thursday 1 May 2014, the Feast of St Joseph the Worker.

Archbishop McMahon is Chair of the Bishops’ Conference Department of Education and Formation and the Catholic Education Service (CES). He is also National President of Pax Christi, the International Catholic Movement for Peace.

For more, please visit the Archdiocese of Liverpool‘s website.