Lutheran-Catholic Commemoration of the Reformation in 1517 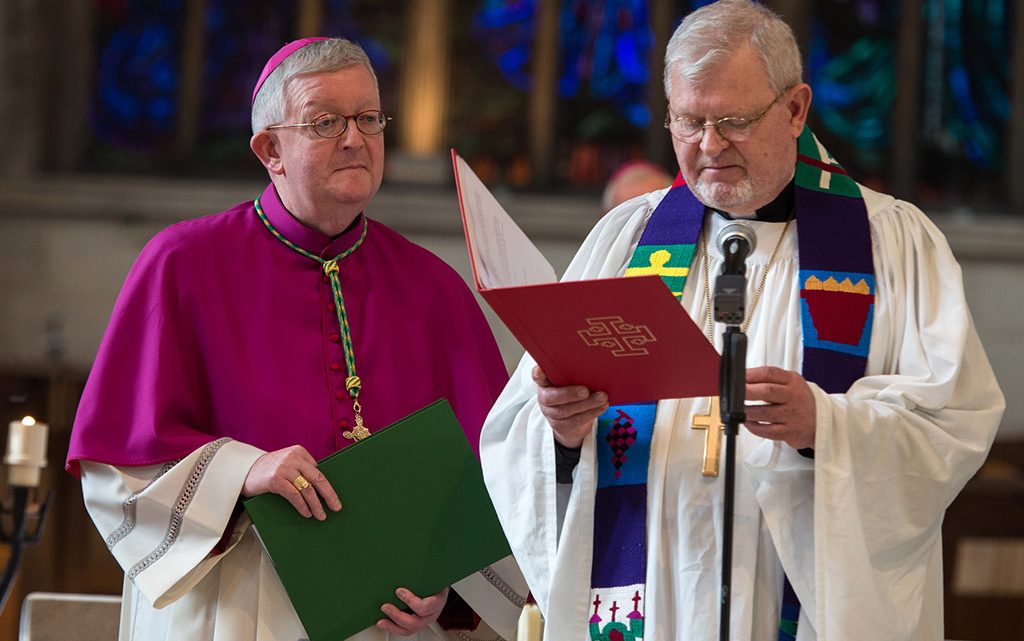 A joint commemoration of the 500th Anniversary of the Reformation was held at St George’s Roman Catholic Cathedral Southwark, hosted by the Archbishop of Southwark, the Most Reverend Peter Smith.

The Archbishop of Birmingham and Chair of the Bishops’ Conference Department of Dialogue and Unity, the Most Reverend Bernard Longley, and Bishop Martin Lind, Bishop of the Lutheran Church in Great Britain preached at the commemoration.

In his homily, Archbishop Longley said that we have all too often allowed ourselves to “be identified and characterised by those features of our Christian traditions that distinguish us from one another.” He reflected on how, in our time “the Scriptures and our common calling to evangelise bid us trust one another enough to follow the Lord side by side.”

The Archbishop shared how fifty years ago, it would have been impossible to conceive of Catholics and Lutherans meeting together in St George’s Cathedral and to “be able to face the challenging story of the Reformation with equanimity, as well as gratitude for this moment.”

He also highlighted how “even twenty years ago nobody could have foreseen that Pope Francis would travel to Lund Cathedral to commemorate the Reformation with the President of the Lutheran World Federation and sign the Joint Statement with its five imperatives.”

The Archbishop gave thanks for the “exchange of gifts that has taken place here in the UK between Lutherans and Catholics, especially over the last thirty years’ and for the many ecumenical friendships which have developed.

The future unity of the Church should be like the remarriage (to each other) of a previously divorced couple who recognise that things cannot go back to what they were before.

“I don’t know if you have ever met a couple that went through a divorce and then, maybe a long time afterwards, found each other again. It is not very common, but it does happen. And I have met such a couple. The most striking was their comments: We have met each other in a new way. We are not going back to what once happened. We are on the way to a new unity, an untried experience.”

Catholics and Lutherans should cultivate a “holy jealousy” of the riches of each others’ traditions.

“I would like to propose a Holy Jealousy. We should help each other to look on each other with holy eyes: what do you in your church have that we don’t have, what do you in your church say that we don’t say – and we have to try to find all these things we envy. That is a good exercise and it will help us to keep and develop mutual respect and love.”

Christian unity is not just about ecclesiastical housekeeping but should provide ‘an instrument to heal the whole world.’

“Christian unity is God’s instrument to help the world to reconcile – and we all know that reconciliation in the world is badly needed today.”

Catholics, Lutherans and Anglicans attended the commemoration service – including the Dean of Southwark Anglican Cathedral, and the Archdeacon of Lewisham – as well as Bishop Howard Tripp, auxiliary Bishop Emeritus of Southwark.

Photos from the Commemoration Service can be found on our Flickr photostream.