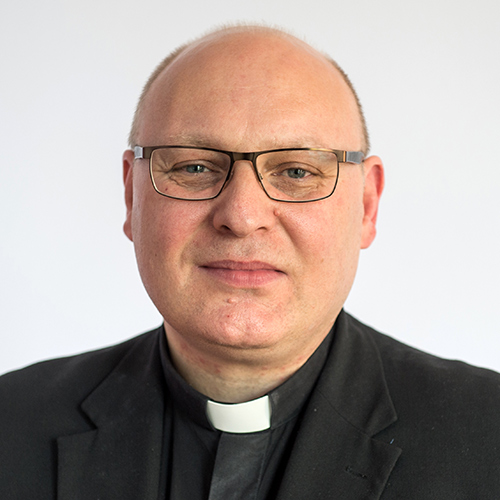 A profile of the Most Reverend John Wilson, Catholic Archbishop of Southwark.

John Wilson was born in Sheffield on 4 July 1968. He studied at the University of Leeds before starting his formation for the priesthood in 1989 at the Venerable English College in Rome. He was ordained a priest for the Diocese of Leeds on 29 July 1995 by Bishop David Konstant.

In 1999, he was appointed Lecturer in moral theology at St Cuthbert’s Seminary, Ushaw College, Durham. He also completed a PhD at Durham University and latterly served as Vice Rector. In 2005, he was appointed Episcopal Vicar for Evangelisation in the Diocese of Leeds, a role he held until 2012. From 2008 to 2014, he was sessional chaplain at HMP Leeds.

He was named a Chaplain to His Holiness by Pope Benedict XVI in May 2011. He was elected Administrator of the Diocese of Leeds by the College of Consultors during the vacancy of the see, an office which he held from September 2012 to November 2014. Most recently he served as Parish Priest of St Martin de Porres, Wakefield.

Bishop Wilson was ordained an Auxiliary Bishop for the Diocese of Westminster on 25 January 2016.

On 10 June 2019, Pope Francis appointed the Most Reverend John Wilson the eleventh Archbishop of Southwark. He will be Installed on 25 July 2019.

For more, please visit the Archdiocese of Southwark‘s website.