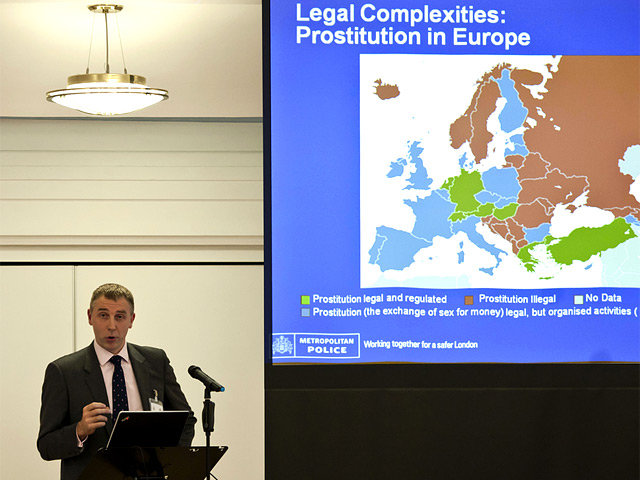 Human trafficking now ranks as the second most profitable worldwide criminal enterprise after the illegal arms trade. The International Labour Organisation estimates that 2.4 million people are trafficked globally and that annual profits generated from trafficking in human beings are as high as $32 billion [1]”

On Thursday 1 December a seminar took place in Southwark, London, on human trafficking, organised by the Office for Migration Policy of the Catholic Bishops’ Conference of England and Wales. Its aim was to raise awareness of the impact of human trafficking in the UK and the rest of the world. Speakers included Bishop Patrick Lynch, SS. CC, Chair of the Office for Migration Policy; Detective Chief Inspector, Nick Sumner and Detective Inspector Kevin Hyland from the Met Police; Sr Eugenia Bonetti MC (Union of Major Superiors) ‘Counter-Trafficking Office’ Rome, Italy and Mrs Mariela Neagu, Child Rights Expert, The Children’s High Level Group Association. Attendees at the seminar included religious orders, embassy staff, ethnic chaplaincies, diocesan representatives and representatives from a wide variety of different organisations.

The Catholic Church in England and Wales is developing its pastoral care for vulnerable migrants in the face of increased demand for trafficked women, men and children, particularly in the South East and East Midlands. The practical response of the Church and its charities, led in the main by Women Religious, is to raise awareness of this horrendous crime and to provide help and support for the most vulnerable victims.

The Office for Migration Policy (OMP) of the Catholic Bishops’ Conference of England and Wales is working in partnership with the Metropolitan Police Service to raise awareness of the impact of human trafficking in the UK and the rest of the word. OMP is also liaising with the UK Embassy to the Holy See, two dicasteries of the Vatican, (The Pontifical Council for Justice and Peace and the Pontifical Council for Migrants and Itinerant People) to develop closer collaboration with the Episcopal Conferences of countries of origin as well as transit and destination countries so that prevention, pastoral care and reintegration of trafficked people can be improved.