To mark the tenth anniversary of Pope Benedict XVI’s visit to the UK, Cardinal Vincent Nichols, President of the Catholic Bishops’ Conference of England and Wales, has shared his memories of the historic four-day visit.

“There are many highlights that stand out in my mind. One was the drive down the great road approaching Buckingham Palace – The Mall – decorated on either side with papal flags and Union Jacks. Packed with people on both sides. It was a sight I thought I would never see.

“A warm, rapturous welcome to the Pope of Rome in this country, which has, for the last 400 years, struggled with its understanding of its relationship to the Catholic Church.”

This week, we celebrate the tenth anniversary of the Papal Visit to Great Britain made by Pope Benedict.

The first decision that the Pope made after accepting the invitation – which, of course, came from the government – from Gordon Brown – although he was no longer in office when the Papal Visit took place. It was David Cameron.

But the first decision he made was to go to Scotland because the first thing he wanted to do was to greet the Queen. It was a very wise decision because it put the whole visit in this light. Here is a visitor to this country, warmly welcomed by Her Majesty the Queen, and that warmth of welcome spread throughout the land and the two weeks of criticism and rancour and distress, expressed by some at this visit, dissipated.

And then we saw in the person of Pope Benedict, nothing of the name that he’d been given of “God’s Rottweiler”. At the end of the visit, as one commentator said, he appeared as everybody’s favourite grandfather. We saw his courtesy, his gentleness, the perceptiveness of his mind and the openness of his welcome to everybody that he met.

To me, there are many highlights that stand out in my mind. One was the drive down the great road approaching Buckingham Palace – The Mall – decorated on either side with papal flags and Union Jacks. Packed with people on both sides. It was a sight I thought I would never see. A warm, rapturous welcome to the Pope of Rome in this country, which has, for the last 400 years, struggled with its understanding of its relationship to the Catholic Church.

And I remember on that trip saying to the Holy Father, “we’re going to Hyde Park and we’re going to use the platform, the stage, which a week before was used for The Proms, for the music.” So I said, “tonight,
it’s not music, but it’s prayer.” And he said to me, “music is prayer, you know – music is prayer too.”

And it was that kind of breadth of his understanding of the human spirit that whenever we are moved by music, then we’re moved towards God. That was so lovely to hear up close.

Obviously, the moment he came to this cathedral was stunning, and the celebration of the Mass was very beautiful. Then he walked to the main doors of the cathedral and met the piazza full of young people who were patient – they’d waited a long time – but rapturous in their applause and welcome for the Holy Father.

I think about his presence in Westminster Abbey, standing there with the Archbishop of Canterbury and again, an echo of that great visit of his predecessor, Pope St John Paul II in Canterbury Cathedral, signalling a great healing of an ancient wound.

And then there was his visit to St Peter’s Residence in Vauxhall, where he literally sat among the elderly and didn’t shy away from identifying himself as somebody in that same phase of life. He talked about the treasure of the elderly and protecting and nurturing that treasure of elderly people in our lives.

And then, of course, there was his visit to Westminster Hall, which I think still resonates, certainly his message to us when he called for a proper dialogue between the world of reason and politics and the world of religion, of faith. He did so, of course, because he’s not one who has ever seen an opposition between reason and faith. In fact, he explained in that speech how faith needs reason and reason needs faith, echoing that phrase again of his predecessor, that faith and reason are the two wings on which the human spirit soars.

He appealed to the great parliamentary democratic tradition of this country, which has always been rooted in rational and measured discourse. And I think of those words today and how shrill so much political discourse has become and how that potential profound dialogue between faith and reason is undermined by a use of social media which seems to demand that policies are reduced to tweets. And that’s undermining so much of what’s best in our traditions here, and indeed the traditions of Catholic theology and discourse. So his appeal remains that we do not give way to the rather shrill and crude and mutually condemnatory manner of public discourse, which is in the air in these days; but hang on much more deeply to the rational depth of human discourse measured by politeness and respect for others.

I think Pope Benedict in this visit ten years ago, built on the impact of the visit of Pope St John Paul II which shifted the perception of the presence of the Catholic Church in this country. And I think the visit – especially the visit to Westminster Hall, still resonates and still gives Catholic politicians a platform and a continuing respect, even though, as I say, the more popular public discourse is difficult to enter into because it wants so much in short sound bites, in aphorisms, in slogans rather than in measured discourse.

So I will be writing to Pope Benedict to thank him for his visit, to thank him for the gifts that he gave us and thank him especially for his beatification of Cardinal John Henry Newman on that wonderful day in Cofton Park in Birmingham. That step has now been completed with the canonisation of Saint John Henry Newman, something which we know thrilled the heart of Pope Emeritus Benedict. In the letter that I’ll send him, I’ll also send him a book of the devotions and meditations of John Henry Newman, which we had published to mark that canonisation, and I’m sure it’s a gift he’ll treasure and which I hope will bring back many, many happy memories for him – as it does for me.

As well as watching the reflection, with iconic images from 2010 weaved throughout, you can listen to or download the Cardinal’s words.

thepapalvisit.org.uk
You can visit the official website that marks Pope Benedict XVI’s visit to the UK in 2010. 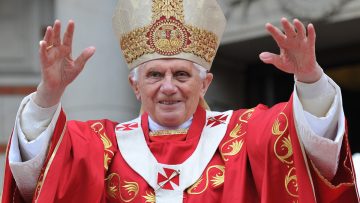 Benedict XVI in the UK: The Speeches

These podcasts are a collection of speeches, homilies and other addresses from the historic state Papal Visit. 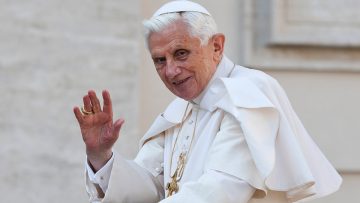 Look back on Pope Benedict XVI's visit to the UK from 16 - 19 September 2010 using this timeline.