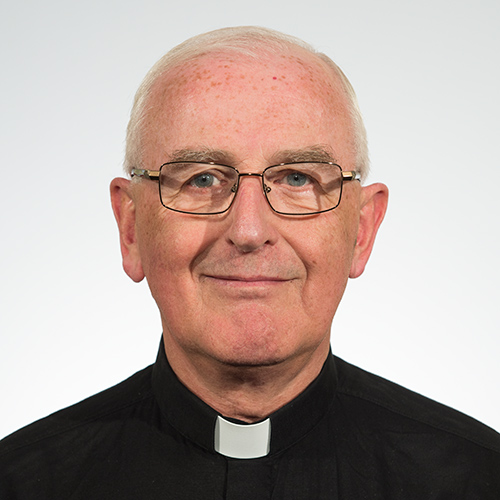 A profile of the Catholic Bishop Emeritus of Menevia, the Right Reverend Tom Burns.

Tom Burns was born in Belfast on 3 June 1944. When the family moved to England he was educated by the Marist Fathers, first of all at St Mary’s College, Blackburn, and then for two years in the Sixth Form at Winslade School, Exeter.

From there he applied to join the Society of Mary, and began his studies for the Priesthood and the religious life at the Marist Monastery in Paignton, Devon. Ordained in 1971, he obtained an Honours Degree in Divinity from London University, as well as a Diploma in Business Studies. After spending two years in the Marist parish at Whitechapel in the East End of London, he taught ‘A Level Economics in Marist Schools at Sidcup in Kent and Blackburn in Lancashire. During this time he became a graduate of the Open University, specialising in Economics and Social Studies.

In 1986 Father Tom was commissioned as a full-time Chaplain in the Royal Navy. After training at HMS RALEIGH and Britannia Royal Naval College Dartmouth, he served as a Chaplain in HMS DRAKE and Devonport Naval Base. From there he went to sea with the ships of the first Flotilla (to the Falklands, the Gulf and the Caribbean), and then joined the Chaplaincy Team in Britannia Royal Naval College Dartmouth. Leaving the Navy in 1992, he took up an appointment as Bursar General at the Marist Fathers’ Headquarters in Rome but subsequently re-entered the Royal Navy in January 1994.

His first appointment was again to sea, for a period of 18 months, when he joined the staff of the Initial Sea Training Department in the newly created post of Chaplain to the Ships embarking Officer Cadets for their first experience of sea-going life. After completing the Initial Staff Course at Greenwich Royal Naval College, he proceeded to Portsmouth, where he headed up an ecumenical team working in HMS NELSON and the Naval Base. Six months later, on the opening of the Tri-Service Chaplaincy Centre at Amport House, near Andover, in April 1996, he became the first Roman Catholic Chaplain to serve there, joining colleagues from the other major Churches on the Directing Staff, and teaching courses in Welfare and Counselling Skills to personnel from all three Services. In May 1998 Father Tom was promoted and appointed Monsignor and Principal Roman Catholic Chaplain (Naval), first of all as Director Naval Chaplaincy Service (Training and Programmes), and then 2 years later as Director (Manning). He was appointed Queen’s Honorary Chaplain on 29 May 1998.

As a qualified Cricket Umpire and Rugby Union Referee, Monsignor Tom has in the past been fully occupied with ‘pastoral’ duties on Saturdays most weekends of the year. His other interests include crime thrillers and war stories, as well as keeping abreast of current affairs – and, not surprisingly, foreign travel – but for leisure rather than business.

Monsignor Tom became Bishop of the Forces on 18 June 2002. He was then fully engaged in official and pastoral visits to Army, Navy, Marines, and Air Force units and establishments throughout the UK and overseas, including Iraq in Holy week 2005. The Bishopric of the Forces is a diocese without geographical boundaries, consisting of Service personnel and their dependants, served by over 40 full-time Catholic Chaplains and a number of TA and Officiating Chaplains.

In 2005, at the request of the Bishops, he set up the St Luke’s Centre, in Manchester, for the support of clergy and religious (women and men). He has an older sister who lives in Shropshire, and two nieces and a nephew.

Bishop Tom was installed as Bishop of Menevia on 1 December 2008.

Bishop Burns is a member of the Bishops’ Conference Department of International Affairs.

For more, please visit the Diocese of Menevia’s website.