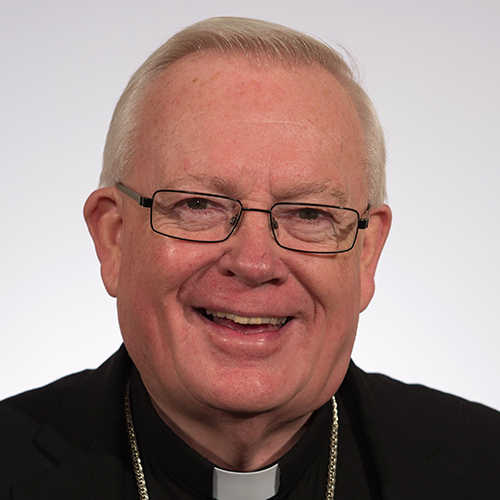 A profile of the Catholic Bishop Emeritus of Northampton, the Right Reverend Peter Doyle.

Bishop Peter John Haworth Doyle was born on 3 May 1944 at Wilpshire, near Blackburn in Lancashire. The eldest son of John and Alice Doyle, he has two brothers, Christopher and John, and one sister, Alison. His mother died in 1976. His father remarried in 1978 and he and Peter’s stepmother, Catherine, moved to Southsea. John Doyle died on 10 February 2011 – may he rest in peace.

The family moved to Essex in 1951, and Bishop Peter was educated by the Jesuits at St. Ignatius Prep School, Buckhurst Hill and at St. Ignatius College, Stamford Hill. Having won a scholarship to Sandhurst he was due to go there after his “A” levels and then onto the Royal Artillery. However, in his final year at school, he decided to offer himself for the priesthood. By then the family had moved to Hampshire where his father had been appointed to his fourth headship at the new All Hallows School in Famham. Bishop Peter decided to approach the Diocese of Portsmouth. Archbishop John Henry King accepted him as a student for the priesthood, and he was sent to Allen Hall seminary, then at Ware in Hertfordshire.

The Bishop was ordained priest by Bishop Derek Worlock in St. John’s Cathedral, Portsmouth on 8 June 1968. At that time Cardinal Cormac Murphy-O’Connor was secretary to Bishop Worlock. Thereafter, Bishop Peter worked in parishes in the Diocese of Portsmouth – assistant priest at St. Joseph’s, Copnor 1968-70, assistant priest at St. Edward’s, Windsor 1970-75, administrator at St. John’s Cathedral, Portsmouth 1975-87, parish priest at St. Joseph’s, Maidenhead 1987-91, and parish priest at St. Peter’s, Winchester 1991-2005 and also at St. Gregory’s, Alresford from 2004. He was a member of the Council of Priests, a Consultor and a member of the Cathedral Chapter and from 2001 a member of the Bishop’s Council and a Vicar General. He was also Dean of Portsmouth and of Winchester, chaired various school Governing bodies, and was Chairman of the Diocesan Schools Commission and the Diocesan Religious Education Council. In the autumn of 2003 he was the Diocesan Administrator while Bishop Crispian Hollis was on sabbatical.

In Winchester Bishop Peter had been looking forward to the challenge of being the one resident priest there and to the developments flowing from the Portsmouth Diocesan Pastoral Assembly which took place in July 2005. Over the years there has been a commitment to justice and peace with the Parish Covenant with the Poor. There are good relationships with Winchester Cathedral and with the other Christian communities in the City. Just before his appointment as Bishop of Northampton, Bishop Peter took on the role of chairman of Churches Together in Winchester. He had also just completed a year as chaplain to the City’s Catholic mayor, and was chaplain to the High Sheriff of Hampshire.

From 1994 he was a member of the Old Brotherhood of the English Secular Clergy from which he had to resign on his appointment as Bishop.

He was ordained as the twelfth Bishop of Northampton on Tuesday 28 June 2005, at Northampton Cathedral (the Cathedral of Our Lady Immaculate and St Thomas of Canterbury, Kingsthorpe Road, Northampton).

On 8 June 2018 Bishop Peter celebrated the Golden Jubilee of his ordination with a Jubilarians’ Mass at Northampton Cathedral followed by a garden party in the sunshine.

To relax the Bishop says that he plays golf “badly” with his fellow clergy. He always comes last in the Clergy Golf competitions! He played squash until recently and he goes skiing once a year usually to Wengen. In earlier days he played rugby for Windsor and Portsmouth as a prop forward. He now enjoys watching rugby and was pleased at the prospect of local matches in Northampton where, appropriately enough, the Saints have their home.

For more, please visit the Diocese of Northampton’s website.