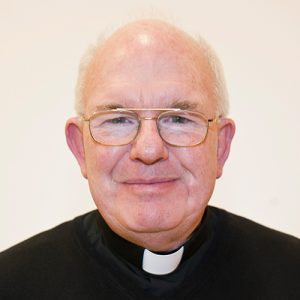 A profile of the Catholic Archbishop Emeritus of Liverpool, the Most Reverend Patrick Kelly.

Born in Morecambe in November 1938, Archbishop Patrick Kelly was ordained to the priesthood at the Venerable English College in Rome in February 1962.

Having served as Rector of Oscott College, he was ordained Bishop of Salford on 3 April 1984.

He was installed Archbishop of Liverpool on 3 July 1996. Archbishop Kelly formerly led the Holy Land Co-ordination, an international gathering of bishops, organised by the Bishops’ Conference, who make an annual pilgrimage to the Holy Land to stand in solidarity with the Christians of the region.

He is also President of the International Catholic Foundation at the service of deaf people, is a consultor to the Pontifical Commission for International Justice and Peace and is a member of the Bishops’ Conference Department of International Affairs.

Archbishop Kelly was Vice President of the Catholic Bishops’ Conference of England and Wales from 1999-2009.

For more, please visit the Archdiocese of Liverpool’s website.