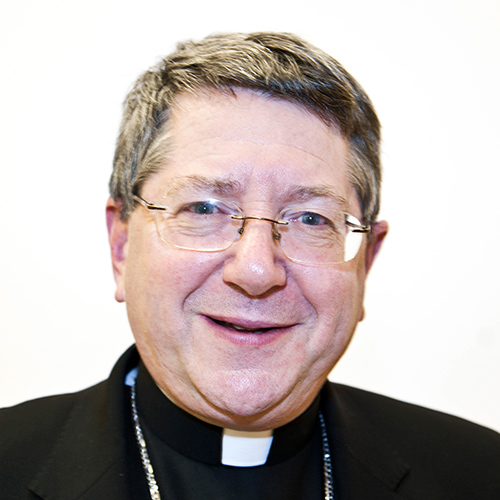 A profile of the Ordinary of the Personal Ordinariate of Our Lady of Walsingham, the Right Reverend Keith Newton.

The Right Reverend Monsignor Keith Newton P.A. was born in Liverpool, United Kingdom, in April 1952, the younger of two brothers.

He married Gill Donnison in August 1973 and they have three children: Lucy, Tom and James. Their eldest, Lucy, is married to Leo and they have a daughter, Katy.

He was educated at Alsop High School, Liverpool (1963-70) and went on to read Theology at King’s College, University of London (1970-73) where he was awarded the degree of Bachelor of Divinity and was made an Associate of Kings College (AKC).

He gained a Post Graduate Certificate of Education (PGCE) from Christchurch College Canterbury in 1974 and continued formation for the Anglican priesthood at St Augustine’s College, Canterbury. He was ordained in the Church of England as a deacon in 1975 and priest a year later for the Anglican Diocese of Chelmsford where he served his first appointment as curate at St Mary’s, Great Ilford.

He was ordained as an Anglican bishop on 7 March 2002 by the then Archbishop of Canterbury, the Most Reverend George Carey, to serve as Suffragan Bishop of Richborough and Provincial Episcopal Visitor in the Province of Canterbury.

He and his wife were received into the full Communion of the Catholic Church at Westminster Cathedral by Bishop Alan Hopes on 1 January 2011.

He was ordained to the sacred priesthood at Westminster Cathedral on 15 January 2011 by Archbishop Vincent Nichols. On the same day he was appointed by Pope Benedict XVI as the first Ordinary of the Personal Ordinariate of Our Lady of Walsingham. On 17 March 2011 he was honoured by His Holiness, Pope Benedict XVI, being elevated to the rank of Protonotary Apostolic.