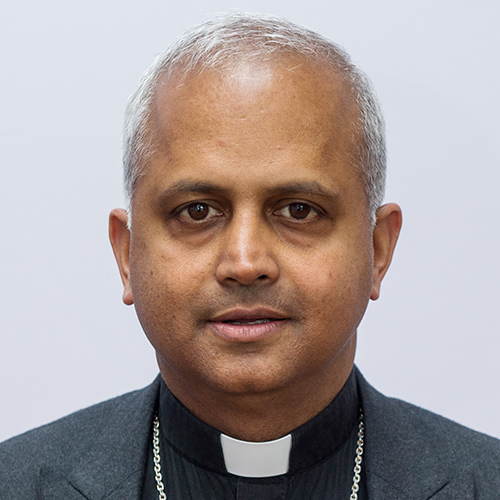 A profile of the Apostolic Eparch of the Syro-Malabar Catholic Eparchy of Great Britain, Right Reverend Mar Joseph Srampickal.

Mar Joseph Srampickal was born on 11 August 1967 as the fourth son of late Mathai Srampickal and Aleykutty Mathew.

He undertook ecclesiastical studies at Paurasthya Vidhyapitham, Vadavathoor (B.Ph.) and at Urban University Rome (B. Th. and Licentiate in Biblical Theology). He was ordained to the priesthood on 12 August 2000.

Mar Srampickal studied at the University of Oxford, England, UK (2001) and got his Masters in Oriental Theology (M.S.T). In 2002 he received his Masters in Education (M.Ed) from Mangalore University, Karnataka. He is proficient in Italian, English, German and Malayalam.

He served as the spiritual father at Mar Sleeva College of Nursing and Mar Sleeva Students’ Hostel, Cherpumkal, Palai, Kerala, India (2005-2010). He was the Director of Evangelisation Programmes and Basic Christian Communities and prayer houses at Narianganam & Maridom of the Diocese of Palai (2010-2012).

Mar Srampickal was a Lecturer of Philosophy and Education, St. Thomas College of Teacher Education, Palai, Kerala India (2004-2005). He also taught Scripture, English and Political Science in the Good Shepherd Minor Seminary, Palai (2002-2004) and in the Mar Ephrem Formation Centre, Palai, Kerala, India (2010). In 2003, he taught Oriental Theology at Benedictine Monastery, Kappad and took classes of Religion, Morals and Values at Mar Sleeva College of Nursing, Cherpumkal during 2005-2010.

He is the Founder Director, Mar Sleeva College of Nursing and Mar Sleeva Students’ Hostel, Cherpumkal, Palai (2005-2010). He served as the Secretary of the Palai Diocesan Medical Education Trust (2005-2013). He was the General Convener of the 28th and 29th Diocesan Bible Convention, Bharanganam, Kerala (2010 and 2011).

He was the Vice-Rector of Collegio Urbano De Propaganda Fide, Rome, Italy from 1 September 2013 until he was given the new mission to become the first Bishop of the Syro-Malabar Eparchy of Great Britain.

The Eparchy is located in Preston, in the Diocese of Lancaster, where the Cathedral dedicated to St Alphonsa can be found, along with the Registry and the Residence of the new bishop.

Bishop Srampickal was ordained in Preston North End’s Deepdale football stadium in front of a crowd of over 12,000 people on Sunday 9 October 2016.

For more, please visit the official site for the Syro-Malabar Eparchy of Great Britain.