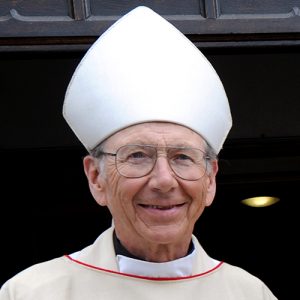 A profile of the late Catholic Archbishop Emeritus of Southwark, the Most Reverend Michael Bowen.

The Most Reverend Michael G. Bowen, S.T.L., Ph.L., former Archbishop of Southwark died in the early hours of Thursday 17 October 2019. He was 89 years-old. Requiescat in pace.

Archbishop Bowen was born in Gibraltar, where his maternal grandparents lived, on 23 April 1930 – the feast day of St George, patron saint of England.

His home until 1959 was in Wimbledon, London. He was the son of Major John Bowen (Irish Guards, killed in action in World War II, Norway 1940) and Mary, née Pedley, who married Sir Paul Makins, Bt, in 1945.

Archbishop Bowen was educated at Downside School before gaining a place at Trinity College, Cambridge.

He was a wine merchant, working for Saccone and Speed Ltd, before entering into formation for the Catholic priesthood at the Venerable English College, Rome, in 1952. He was ordained a priest for the Archdiocese of Southwark on 6 July 1958.

Twelve years later, he was Ordained the second Bishop of the Diocese of Arundel and Brighton on 14 March 1971.

That same year, he was elected with Cardinal Heenan to represent the Bishops of England and Wales at the Rome Synod on “The Priesthood” and on “Justice and Peace in the World”.

He was a member of the Standing Committee of the Bishops’ Conference of England and Wales, and Chairman of it from 1999 to 2001.

Archbishop Bowen also served the Bishops’ Conference as Chair of the Department of Christian Life and Worship (1983-99) and Chair of the Committee for Marriage and Family Life (1983-86).

Having been elected Vice-President of the Bishops’ Conference previously, he was elected President in 1999 for a five-year term. Having represented the Conference at the Millennium events, he resigned the post in November 2000 to allow the new Archbishop of Westminster to be elected.

He retired as Archbishop of Southwark after 26 years of service on 8 December 2003.

“He has been a true teacher and guide to his flock, a man who has led with certainty and humility, and served well the people and priests of his Archdiocese.”