Holy See statement on the celebration of Mass ad orientem 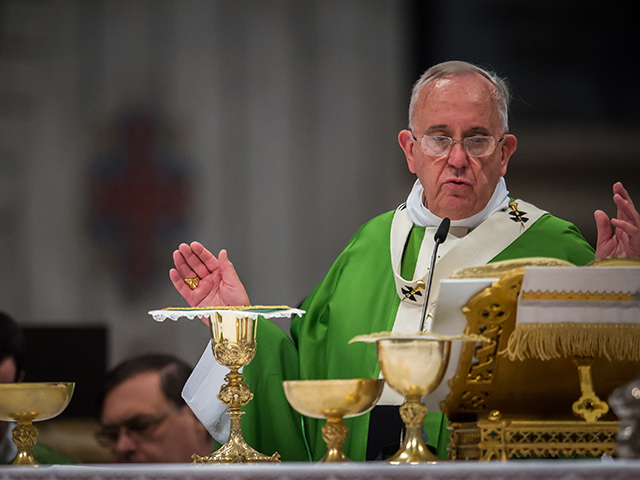 Vatican spokesman Fr Federico Lombardi has issued a statement on Cardinal Sarah’s comments in London at a Sacra Liturgia conference on Tuesday 5 July 2016 concerning the celebration of Mass ad orientem (facing east rather than towards the congregation).

“Clarification is appropriate following media reports which circulated after a conference held in London by Cardinal Sarah, Prefect of the Congregation for Divine Worship.

“Cardinal Sarah has always been rightly concerned about the dignity of the celebration of the Mass, in order to adequately express the attitude of respect and adoration of the Eucharistic mystery.

“Some of his expressions were, however, misinterpreted, as if they were to announce new indications that differ from those which are given so far in the liturgical norms and in the words of the Pope on the celebration facing the people and the ordinary Mass rite.”

“Thus, it is good to remember,” said Fr Lombardi, “that the Institutio Generalis Missalis Romani (General Instruction of the Roman Missal), which contains the rules for the Eucharistic celebration and is still in full force, states in paragraph 299: ‘Altare extruatur a pariete seiunctum, ut facile circumiri et in eo celebratio versus populum peragi possit, quod expedit ubicumque possibile sit. Altare eum autem occupet locum , ut revera centrum sit ad quod totius congregationis fidelium attentio sponte convertatur’ (i.e. ‘The altar should be built apart from the wall, in such a way that it is possible to walk around it easily and that Mass can be celebrated at it facing the people, which is desirable wherever possible. The altar should, moreover, be so placed as to be truly the centre toward which the attention of the whole congregation of the faithful naturally turns.’).”

“For his part, Pope Francis,” said Fr Lombardi, “on the occasion of his visit to the Dicastery of Divine Worship, specifically mentioned that the ‘ordinary’ form of the celebration of Mass is that which is intended by the Missal promulgated by Paul VI, while the ‘extraordinary’ form, which was allowed by Pope Benedict XVI for the purposes and in the manner which he explained in the Motu Proprio Summorum Pontificum, must not take the place of the ‘ordinary’.”

“Thus, new liturgical directives as of next Advent are not foreseen,” said Fr Lombardi, “as some have wrongly inferred from some words of Cardinal Sarah, and it is best to avoid using the expression ‘reform of the reform’, referring to the liturgy, as it has sometimes been a source of misunderstanding. This was mutually expressed during a recent audience granted by the Pope to the same Cardinal Prefect of the Congregation of Divine Worship.”