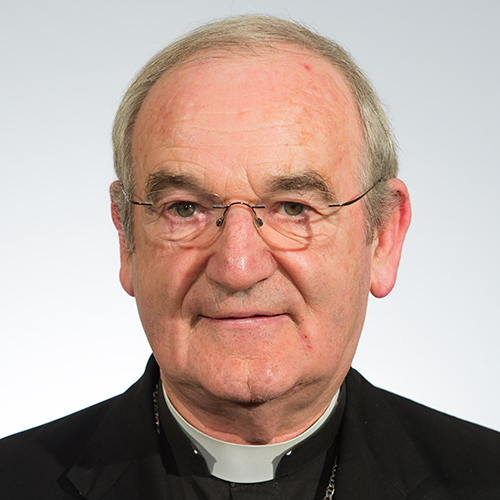 A profile of the Catholic Archbishop of Cardiff, the Most Reverend George Stack.

Archbishop George Stack was born in Cork, Ireland, on 9 May 1946. He was educated at St Aloysius Secondary School, Highgate, London, and studied for the priesthood at St Edmund’s College, Ware, from 1966 to 1972.

He was ordained a priest for the Archdiocese of Westminster on 21 May 1972. Until 1975 he served as assistant priest at Our Lady and St Joseph, Hanwell. From 1972 he also served as chaplain to St Bernard’s Hospital, Southall (until 1975) and chaplain to Cardinal Wiseman School, Greenford (until 1976).

From 1974 to 1977 Archbishop George undertook further studies at St Mary’s College, Strawberry Hill, and gained a Bachelor of Education degree. He then became a member of Westminster Religious Education Centre. In 1977 he was appointed assistant priest at St Paul the Apostle, Wood Green, and in 1983, parish priest at Our Lady Help of Christians, Kentish Town.

In 1990, he was appointed Vicar General for Clergy in the Westminster Diocese. He became Administrator of Westminster Cathedral in 1993.

On 12 April 2001 he was ordained an Auxiliary Archbishop for the Diocese of Westminster. He was Chairman of the Diocesan Department for Education and Formation and had pastoral responsibility for the Deaneries in Hertfordshire.

In addition to his Diocesan responsibilities the Archbishop served as Chair of Governors at St Mary’s University College, Twickenham; a Governor at Heythrop College in the University of London and as member of the board of St John and St Elizabeth’s Hospital, London.

Archbishop Stack was Installed as the seventh Archbishop of Cardiff at St. David’s Cathedral Cardiff on the 20 June 2011, the feast of Ss. Alban, Aaron and Julian.

Archbishop Stack in also currently the Apostolic Administrator of the Diocese of Menevia.

He is Chair of the Bishops’ Conference Department for Christian Life and Worship and also Chair of the Patrimony Committee. He represents the bishops on ICEL (International Commission on English in the Liturgy).

For more, please visit the Archdiocese of Cardiff’s website.