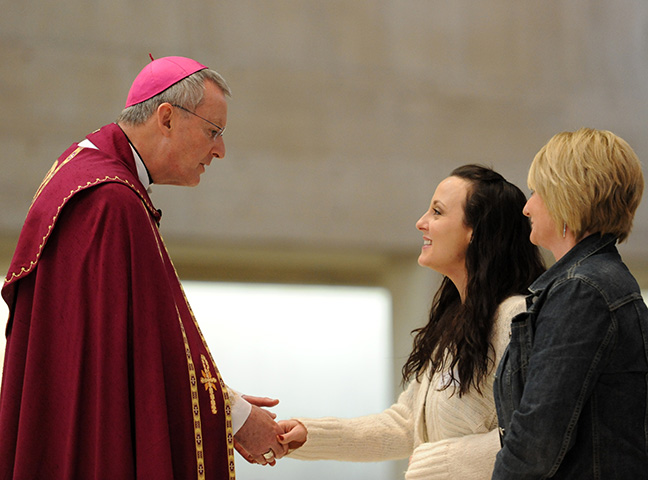 From Newcastle to Plymouth, Cardiff to Norwich and Liverpool to Brighton, the first weekend of Lent saw groups coming together to celebrate their decision to become Catholics.

Karen from Shrewsbury Diocese took part in the celebration, called the Rite of Election, at her local Cathedral and shared: “I didn’t have any religious upbringing, and prayers and church were not part of my experience at all. There wasn’t much of anything faith wise, to be honest. I went to the occasional baptism, wedding and funeral, but didn’t have any spiritual awareness… The decision to become a Catholic has come about gradually over two years, and my faith has been growing. There has been a massive difference in me as an individual… I would recommend exploring becoming a Catholic to anyone!”

Meanwhile Oliver from Leeds Diocese, who also attended a celebration at the weekend, said: “I was a militant atheist during the rest of my school years, until I went to university where I became more interested in God and explored different faiths… The more I thought about the message of Christianity, the more I realised that everything I had been looking for since I was young, was to be found in my own culture and upbringing: I had been searching in the wrong place.”

For Michelle, who took part in a celebration in Nottingham Cathedral, she shared that it was something of a family affair: “My fiancé decided to join with me… Then my two sisters also decided to do the same as well, and one of my sisters’ fiancé’s followed suit, so we’re all going! I also have a little girl who is nearly 8 and she’s following the children’s version of the Rite too, so all-in-all it’s quite a family thing!”

This year on 8-9 March over 3,200 people came together in Catholic Cathedrals, for a celebration that is called the ‘Rite of Election’. It is an annual moment in the Catholic calendar when adults share their intention, in a public way, to become Catholics. The Rite usually happens in the local Cathedral with the Bishop officiating.

Bishop Kieran Conry is the national Chair of the Bishops’ Department that overseas the work of Catholic evangelisation and said: “This is one of the most joyful and expectant times of the year for those adults, and some children, who have chosen to prepare to become Catholics at Easter. It marks the approaching culmination of a unique moment on people’s journeys of faith. It’s important that we celebrate with them, that we share their joy, and are also attentive, if and when the moment presents itself, to invite those we know to consider finding out more about the Catholic Faith.”

Additional stories of faith can be found in the right hand corner of this page (pdf).

Below you will find a breakdown of the number of people who participated in the Rite of Election. Please note, the numbers offered are not fully reflective of the total number of people who will be received into Church at Easter. In many dioceses, for reasons related to geography, only a small proportion of parishes are able to participate in the Rite of Election. The figures provided therefore only provide a snapshot of the overall numbers.

2010 News
Rite of Election: Weekend of joy for the Catholic community

This initiative is coordinated by the Bishops’ Conference Home Mission Desk, working in partnership with the RCIA Network.