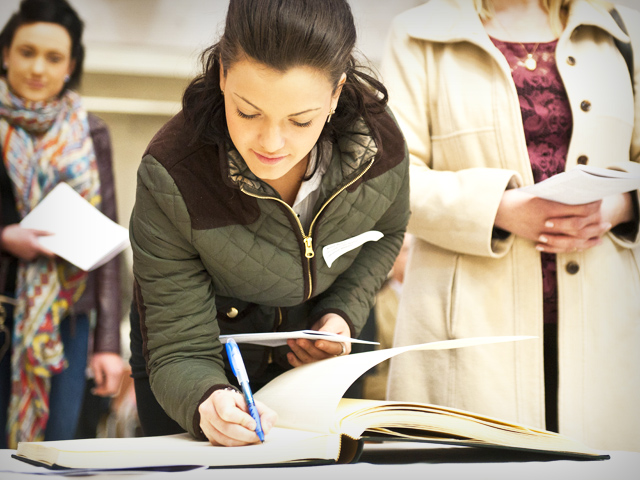 As several thousand people across England and Wales take a step towards joining the Catholic Church, a collation of some of their faith stories have been published here on catholicnews.org.uk.

Tony, 25, from Woking is one of those featured and recalls how he experienced God during a boating accident. He wrote:

“I felt like giving up. That was my hour of need and all I could do was turn to God. I knew about praying from school. There was nothing else I could do but pray. I said: ‘Dear God, please can you show me some kind of sign my brothers are OK and give me the strength to get them.’ At the moment I said, ‘Amen’, I heard my brothers calling to me, ‘We were all OK’ – I saw that as a sign.”

For Sheila from North Somerset, the turning point came when her husband became ill and died:

“I was impressed at the comfort his family got from their faith and I realised that I did not have that comfort. I thought then that I should investigate the possibility of converting to the Catholic Faith, but as I didn’t want to make such an important decision whilst in an emotional state, I decided to wait. After a year I found I still wanted to know more, so I began attending Mass and after a couple of weeks contacted my local church and started attending RCIA meetings.”

Meanwhile Glynn, from Liverpool and a retired professional footballer, shared how a spiritual dream changed his life:

“My football career spanned 18 years and I played for four or five different clubs – Chesterfield, Shrewsbury, Notts County, Barnsley… Religion wasn’t part of my up-bringing. It didn’t play a part in my mum and dad’s outlook on life: They weren’t believers. I think my Nan goes to church but apart from that I don’t think anyone else does. When I was about 22 years old I had a dream and have since come to understand that Our Lady, the Mother of Jesus, spoke to me. Initially I thought it was an angel that had spoken to me. It all came as a great shock but at the same time was incredible.”

Molly Styant is the National Convenor of the RCIA Network and said:

“This is such a wonderful time of year when we celebrate the fact that people have taken a new step in their journey of faith. Everyone’s journey is unique and it’s so inspiring to see how the Holy Spirit, in so many different ways, has worked in people’s lives. The RCIA is a great tool of evangelisation and helps so many people searching for a spiritual home.”

You can read more from Tony, Sheila and Glynn by downloading a PDF of their testimonies – just use the link to the right of this page. You can also read a summary of the following people’s stories: Jonathan, aged 30 from Cornwall, Craig, 29 from Jarrow, Jean, 70 from Newcastle-upon-Tyne, Ian, 50 from Stockport, and Alison from Horsham.

They have already followed or are following the Rite of Catholic Initiation of Adults (RCIA) which exists to support and welcome people into the Catholic Church. Last weekend groups gathered in Cathedrals across England and Wales to celebrate part of the RCIA called the Rite of Election.

These faith stories are accompanied, below, by a breakdown of the numbers of people who participated in the Rite. Please note, this is not fully reflective of the total number of people who will be received into Church at Easter, but does provide a snapshot.

Feature
The Rite of Election 2012

2010 News
Rite of Election: Weekend of joy for the Catholic community