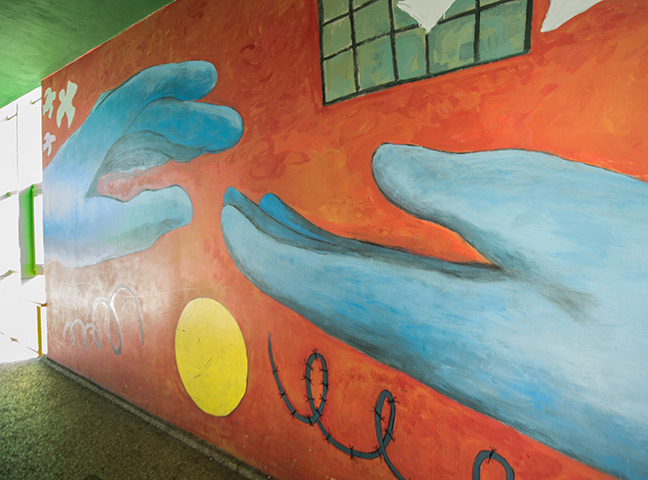 The following article was published in The Catholic Universe on Friday 23 September, in it Bishop Declan Lang calls on Catholics not to forget victims of enforced disappearances around the world.

Imagine the horror of armed and masked men bursting into your home, grabbing one of your family, cuffing their hands, putting a hood over their head, bundling them into a van and driving off into the night. Imagine the trepidation and confusion as over the coming weeks and months you hear nothing. You know that your government is probably involved but the authorities deny all knowledge. All of your questions remain unanswered: Why was your loved one taken? Where are they being held? Are they being tortured? Are they even still alive?

Last month the UN marked the International Day for Victims of Enforced Disappearances, demanding justice for the thousands of people who have been abducted under dictatorial regimes or in conflict zones across the world. Speaking about the impact of this crime against humanity, Secretary General Ban Ki-moon reminded us that “victims of enforced disappearances are also the parents, children, partners or friends of those who have disappeared; anguished women and men desperately seeking any information, even if only a clue…They have a right to know the truth regarding the circumstances of these disappearances, the progress and results of any investigations, and ultimately, the fate and whereabouts of their loved ones.”

Oppressive governments have long used enforced disappearances to silence a myriad of political opponents, human rights activists, journalists, ethnic leaders, and religious figures. In secret detention centres they are deprived of even the most flawed or rudimentary legal protections. Away from the eyes of the world they face violence, torture, and even execution. Meanwhile their families are left in anguish; as the years pass and hopes fade they are robbed of any closure. Many are also left with enormous financial pressures, while those who search for answers often face harassment and intimation.

This is not simply a historical injustice committed by past regimes like the far-right governments that wreaked havoc throughout Latin America in the 1970s and 1980s. Tens of thousands of people have disappeared since the turn of the century and government-sanctioned abductions continue in many countries today. In 2015 alone the UN’s Committee on Enforced Disappearances received over 200 new representations from family members, but believes that these reflect just a tiny fraction of the total number who vanished last year. The threat of reprisal and a lack of understanding about international recourse mean that thousands of cases are likely to go unreported.

Sometimes these abuses take place under the auspices of counter-terror operations. In July Human Rights Watch reported that during recent years it had verified dozens of enforced disappearances by Kenyan security forces in their battle against Islamist militants. Ironically such tactics often have the impact of alienating communities and driving people into the hands of extremists rather than making society safer. Observers have reported a similar increase in enforced disappearances across Egypt, with many political opponents being arbitrarily detained for months on end and suffering brutal torture in undisclosed locations. Eastern Ukraine is another area of growing concern, with both Ukrainian authorities and Russia-backed separatist groups holding people in secret detention and frequently refusing to even acknowledge their existence.

The legacy of enforced disappearances has also left many countries unable to properly move on from terror in their recent past. Although the Sri Lankan government’s brutal war against the Tamil Tigers ended seven years ago, investigations have only just begun into the 20,000 people who went missing during the conflict, many of them through enforced disappearances from their homes. The new government has recognised that families need answers so they can find closure and take legal action against those responsible for the abduction of their loved ones, but progress toward this has been painfully slow.

Likewise work has only recently begun on tracing more than 1000 people who disappeared before fighting between the Nepalese government and Maoist insurgents concluded in 2006. During that conflict young men in particular were systematically detained without charge or trial and many have not been seen by their families in more than a decade. The international community is now supporting a newly formed Commission of Investigation on Enforced Disappeared Persons which began its work in March and aims to help heal some of the deep wounds that these disappearances have inflicted upon the country.

During this Year of Mercy the Catholic community has been galvanised into action behind vital causes such as global abolition of the death penalty and improving prison conditions. It is important that we also take a stand against enforced disappearances, as one of the most extreme violations of human dignity and family life in our world today. There are many practical steps that we can all take such as finding out about cases from groups like Action By Christians Against Torture and Christian Solidarity Worldwide; lobbying MPs to raise these in Parliament; and supporting organisations such as the International Committee of the Red Cross which works tirelessly on behalf of victims and their families. By doing so we can ensure that whenever people are detained away from the eyes of the world they are never abandoned.