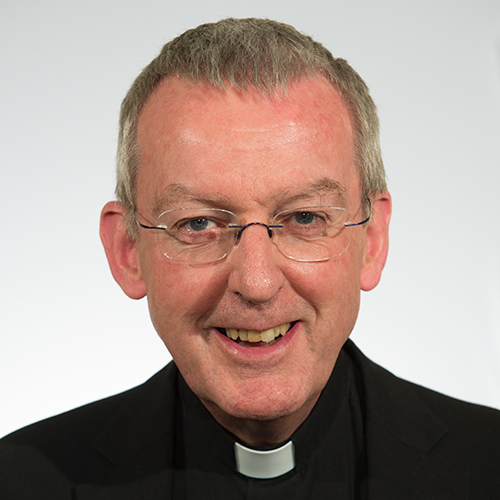 A profile of the Catholic Bishop of Clifton, the Right Reverend Declan Lang.

Bishop Declan Lang is the ninth Bishop of Clifton. The Clifton Diocese came in to existence in 1851 and was preceded by the Western District.

Bishop Lang was born on 15 April 1950 in Cowes on the Isle of Wight. Both his parents came from Ireland. His father was a doctor in Cowes having previously worked as a GP in Birmingham.

He went to Allen Hall, St Edmund’s College, Ware to train for the priesthood in September 1968 and while he was there he also went to Royal Holloway College University of London, where he gained a BA in history.

He was ordained a priest on 7 June 1975 by Bishop Derek Worlock at St John’s Cathedral, Portsmouth. He was then appointed as an Assistant Priest at the Cathedral and Chaplain to St Edmund’s Comprehensive School in Portsmouth.

Four years after ordination he was appointed Secretary to Bishop Emery and Chancellor. During this time he also worked on the Diocesan Youth Commission, which he later chaired. For a number of years he went as Chaplain with the Portsmouth Group to Lourdes at Easter.

As a result of his work in Adult Religious Education he produced together with John O’Shea, Vicky Cosstick and Damian Lundy ‘Parish Project’. This was to help parishes look at what they were currently doing, evaluate it and plan together future direction. This process was taken up by a number of parishes throughout the country.

In September 1990 he was appointed Moderator of the Curia and Administrator of St John’s Cathedral, Portsmouth. During this time he was also involved in organising a summer conference for the Diocese of Portsmouth and helped organise conferences in Southwark and Shrewsbury.

In January 1996 he was appointed as one of the Vicars General in the diocese moving from Portsmouth to Abingdon in September 1996.

Whilst in Abingdon he chaired a working party on clergy appraisal which was jointly sponsored by the Bishop’s Conference and the National Conference of Priests. The working party report was accepted by both conferences.

Within the diocese Bishop Lang instigated a review of diocesan structures and as a result created the Diocesan Department for Evangelisation and Adult Education and a new Department for Schools and Colleges. During this time the Diocesan Liturgical Commission has also been reformed. He has launched a process of renewal entitled ‘Seeking the Face of Christ’ the purpose of which is to draw up pastoral guidelines for the development of the diocese. This resulted in our diocesan pastoral guidelines ‘Called to be a People of Hope’. This involved all parishes and other communities that make up the Clifton Diocese.

In 2002 Bishop Lang was appointed an Ecumenical Prebendary of Bristol Cathedral.

Bishop Lang is Chair of the Bishops’ Conference Department for International Affairs and sits on the Mixed Commission of the Conference of Religious. He is the Chair of the Trustee Board of Missio – the Pontifical Missionary Societies. Previously he was a member of the Department for Dialogue and Unity being the joint co-chair of the English Anglican Roman Catholic Committee and the committee for dialogue between the United Reformed Church and the Roman Catholic Church. He was also, until recently, Vice Chair of the National Catholic Safeguarding Commission.

For more, please visit the Diocese of Clifton’s website.