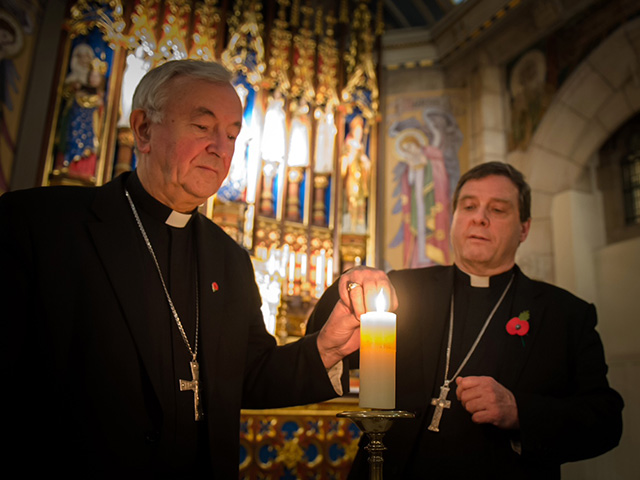 CBCEW » News and Media » » Church leaders come together to pra...

Cardinal Vincent Nichols, president of the Catholic Bishops’ Conference of England and Wales, and the Bishop of Wakefield, the Rt Revd Tony Robinson lit candles and prayed in St Anne’s Cathedral in Leeds for the couple and their unborn daughter who were burned to death in Pakistan last week.

The Bishops’ prayer for peace and the repose of the souls of Sajjad Maseeh, 27, and his wife Shama Bibi, 24, followed Ecumenical Vespers, celebrating the 50th anniversary of the second Vatican Council’s groundbreaking Ecumenical decree Unitatis Redintegratio.

The Bishops condemned the actions of the 1,200 strong mob in Pakistan who burned the couple amidst rumours they had burned verses of the Quran. They also appealed to the Pakistan Government to bring the perpetrators to justice and protect the rights of minorities.

Family member, Javeed Masseeh described how their legs had been broken so they could not run away and then the couple were held over the brick furnace until their clothes caught fire and then thrown down inside the furnace. Bibi, a mother of four, was four months pregnant.

“This is a horrific and tragic event which sullies the reputation of a great nation. Surely all people of true religious spirit will, in response, turn to God in prayer, seeking forgiveness for the violence and destruction of life, pleading for peace in our troubled world.

“For my part I pray for the repose of the souls of the couple and their unborn child.”

Bishop Tony Robinson, Chair of the Archbishop of Canterbury’s Pakistan Focus Group and who was in Pakistan in March, said:

“The savage attack and murder of these two Christians and their unborn child is unacceptable in any civilised society.

“The Pakistan Government must do more to protect minorities in Pakistan from mob rule and a misuse of the blasphemy laws.

“In this country we hold that freedom of religion is at the core of our tolerant and democratic society. As we look around the world today there are many places where people are not allowed this freedom. We must not take the freedom we have lightly and work to change the attitudes of those who persecute people of another faith.”

In March this year Bishop Robinson visited Pakistan where he met the country’s president Mamnoon Hussain to discuss the persecution of minorities.