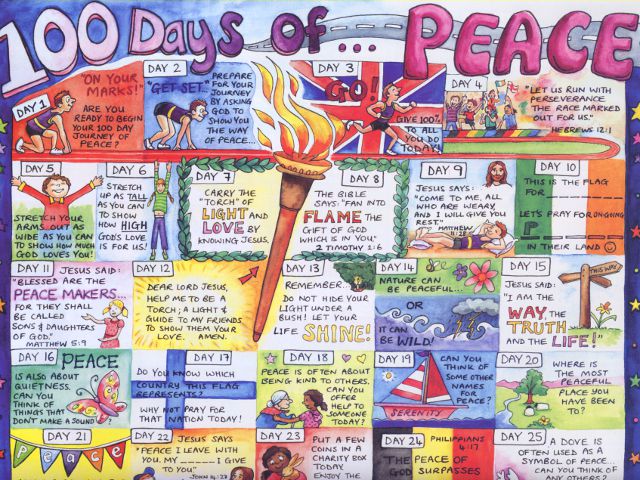 Hundreds of people from all faiths and none will gather at the invitation of the Christian community at St Martin’s-in-the-Fields, Trafalgar Square on the evening of Friday 8 June for a united vigil of prayer and reflection. This will mark the official launch of the ‘100 days of peace’ Olympic initiative as a reminder to the world of the Games’ true and original purpose.

The underlying cause of the Ancient Olympic Games, and the reason for reinstating the Modern Olympic Games in 1896, was to use sporting activity as the vehicle to bring greater peace among peoples from every walk of life across the globe.

Churches across Britain are being asked to reawaken this ancient Greek tradition in the run up to the 2012 Olympic and Paralympic Games with 50 days of peace on either side of this summer’s sporting mega event. This initiative asks that everyone participates wherever possible in praying and working towards a more peace-filled global society.

The diocesan education authorities and Justice and Peace commissions of Westminster and Southwark archdioceses, along with the Diocese of Brentwood, have extended an invitation to people from different faiths, charities, NGOs, and national peace groups to gather between 11pm on Friday 8 June and midday on Saturday 9 June to pray and reflect for all aspects of this summer’s Games.

A different theme of prayer will be covered throughout the night with More Than Gold, the churches’ joint 2012 charity, leading an hour’s prayer for the athletes and visitors. Peace in London and across all our nation’s cities will be the theme of London Citizens’ hour. Aid agencies World Vision, Christian Aid and CAFOD will unite to pray for one world of justice and compassion. Other themes to be covered include the flourishing of international art and culture, prayer for people of all faiths and for young people, their health, happiness and futures.

Archbishop Vincent Nichols of Westminster said of this initiative:

“Despite the reality of the violent events last summer, they do not reflect the true nature of any human being, including those in their youth. We witness and applaud the great passion of so many young people for justice, their immense desire for peace. The 2012 Games give us as Catholics the possibility to form all hearts to be ever more what God has made them to be: wellsprings ready, given the opportunity, to release peace.

“By joining me in prayer during the 100 Days of Peace, and by practically engaging in this initiative 50 days before, throughout and 50 days after the Games, by God’s grace, a legacy more precious than gold will prevail for London, for our country and, indeed, for our world.”

“Few Olympic host countries have ever taken the lead in seriously working to bring about greater peace and unity within their own nation and the nations of the world. Sport is only one means of doing this. Our hope is that, prompted by the young people of Britain, we might all try and play every way possible to make the world a more peaceful and trustworthy place. This initiative is one good example of many to help achieve this.”

Archbishop Nichols will be joined by the Bishop of London, Richard Chartres, for a concluding service and Songs of Praise for peace led by a number of renowned choirs at 11am on the Saturday morning.