Christian-Muslim Relations: To Engage in Dialogue with Others, while Bearing Witness to our Faith 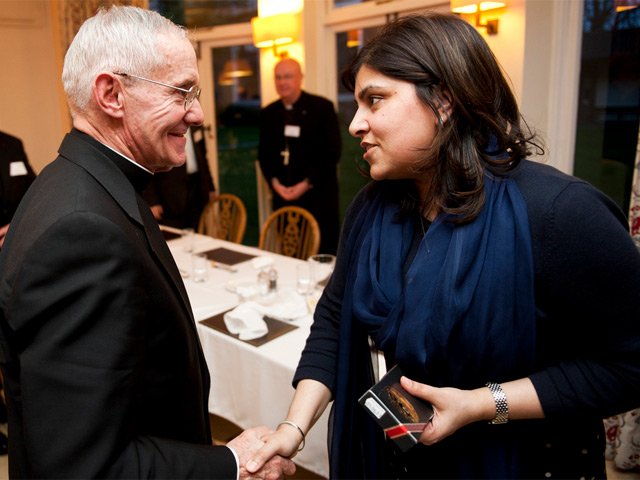 Final statement from the Council of Bishops’ Conferences of Europe (CCEE), after the third meeting of Bishops and delegates for Christian–Muslim Relations in Europe. The conference took place in London and focused on relations and dialogue between Christians and Muslims:

All testimonies of faith imply engaging in dialogue with everybody. In contemporary Europe, whether East or West, North or South, dialogue between Christians and Muslims has become a mandatory necessity. And this can only be achieved through deeper mutual knowledge. Only through contact and dialogue will it be possible to approach Muslim believers within genuine and unbiased relations. In secularized and pluralistic societies, the challenge of educating people to open up to diversity must be integrated with a deepening of our faith and identity. At the same time, pluralistic societies can only exist if people respect and are looking forward to knowing each other, through constant dialogue. These are just some of the thoughts that were shared by bishops and Bishops Conferences’ delegates for Christian-Muslim relations, who gathered in London for a three-day working meeting.

Dialogue and proclamation and the question of building Christian and Muslim youths’ identity were the two main themes that were discussed during the meeting, chaired by Cardinal Jean-Pierre Ricard, Archbishop of Bordeaux. The meeting was attended by bishops and delegates for Christian-Muslim relations from 20 European Bishops’ Conferences, as well as delegates from cultural and Church institutions.

Father Andrea Pacini, CCEE Meeting Coordinator and Secretary for ecumenism and interreligious dialogue of the regional Bishops’ Conference of Piedmont and the Aosta Valley, discussed the relationship between dialogue and proclamation, showing how living testimony is the best synthesis and response regarding both pastoral needs. The reflection on identity building for young Christians and Muslim was illustrated, instead, by Prof. Brigitte Maréchal, from the University of Louvain, and Dr. Erwin Tanner, Secretary General of the Swiss Bishops’ Conference.

The President of the Pontifical Council for Interreligious Dialogue, Cardinal Jean-Louis Tauran, and the President of the Bishops’ Conference of England and Wales, Mons. Vincent Nichols, Archbishop of Westminster, were also in attendance.

Baroness Sayeeda Hussain Warsi’s cordial visit – Minister for Faith and Communities and Senior Minister of State in the Foreign and Commonwealth Office – was particularly appreciated. The visit took place in an informal and friendly ambiance, and also testified to the British Government’s commitment in favor of the various religious communities.

During their three-day London meeting, participants addressed the plight of young Christians living as minorities: they discussed the situation in their respective countries, and the difficulties young Christians go through, which might possibly lead to their conversion to Islam. The issue of young Christians’ lesser engagement in their faith – compared to their Muslim peers – was also explored, as well as the initiatives the Church is currently introducing in Europe in order to be present among young people in new and different ways.

During the meeting, delegates from Albania, France, Germany and England reported on their countries’ situation.

The following points are just some of the conclusions from the reflections, comments and testimonies that were shared during the meeting:

1. All contributions confirmed the Muslim world’s extreme diversity: not only Prof. Maréchal’s lecture, but also the international exchange of experiences provided a very accurate description of this diversity (in terms of background, spiritual approaches, proposals and offers that are specifically addressed to Muslim youths). Therefore, there is no homogeneous Islam, but rather several different Muslims.

2. The importance of dialogue emerged quite strongly, especially regarding younger and older Muslims’ different attitudes towards other non-Muslim groups in society. Some national experiences of dialogue proved to be particularly interesting, both from the human and religious standpoint, as was the case with Belgium. As a matter of fact, there is always the risk of approaching others with preconceived ideas, whereas only encounter and dialogue allow people to see reality for what it really is. Actually meeting each other leads to better co-existence between people with different religions, as well as greater cooperation in many domains of social life.

3. Christians and Muslims would greatly benefit from a joint reflection on the challenges of educating believers, especially young people, in a kind of society that is both secularized and pluralistic at the same time. A society where the World Wide Web, social media and a completely different outlook on things have become a challenge for both Christian and Muslim youths, when they start thinking about life’s meaning in the world they live in. This kind of education implies a deep personal belief (a personal encounter with God, intelligence of faith, spiritual life…), but also the awareness of belonging to a community that supports life and faith. Hence, personal beliefs, community support and openness towards others are the way for dialogue to be able to shape people’s minds.

4. Regarding education, it is also important to educate people to open up to and embrace diversity. Experiencing diversity in a peaceful way that is open to mutual enrichement, rather than with uneasiness and wariness, is absolutely vital. But this cannot be taken for granted: people must also become familiar with other people’s diversity, which is the only way for them to grow without falling prey to materialism or fundamentalism.

5. Among the various issues that are emerging in the current European context, some are related to religions’ role in society. Participants wondered whether the appearance of Islam on their respective social scenes, and the issues raised by Muslims, should not perhaps compel Western European societies to reconsider the contemporary ideologies and mindsets we have become accustomed to. And perhaps this presence might also lead us to consider, once again, the issue of the importance of faith and transcendence in consumer societies. Since we are living in a society that is based on having, doing and consuming, society itself points us back to the importance of being and our relationship with God. At Church level, wouldn’t it be advisable to reconsider what so far has been perceived as the basic message of interreligious dialogue, i.e. the rejection of proselytism? Sure, we all agree on the fact that other people’s freedom should not only be respected but also promoted; but if this is in any way seen as a way for us to hide our beliefs and not share them with others, than this becomes a problem. On the other hand, some countries are clearly tempted to confine religiosity to the private sphere, excluding it from the so-called public domain (which is actually larger that what actually depends upon States or Governments). Instead, we should be thinking about the personal dimension of citizenship. Europe has inherited a notion of Man from the French revolution, by which he is seen only as an individual, cut off from his family and community: i.e., Man as a lonely and isolated creature! Perhaps today we should be rethinking about this individualistic view of Man, without falling prey to a closed kind of communalism.

6. Lastly, delegates also recalled how engaging in interreligious dialogue is not only an ethical need that allows us to live better together, but is also a spiritual and theological need. In this moment in time, dialogue is not being particularly supported, and this is important to remember, to avoid falling into the pitfall of thinking that dialogue is optional or that it has to produce immediate results… Therefore, why should we be investing in dialogue? For the simple reason that, to Christians, dialogue is one of their faith’s dimensions or consequences: faith in a God who engages in dialogue with Man and who is always the one making the first step to reach out to his creatures. Hence, Christians are called to engage in dialogue more gratuitously and generously perhaps, also when there is no response coming from the other side.

The Council of Bishops’ Conferences of Europe (CCEE) includes the currently existing 33 Bishops’ Conferences of Europe, represented by their Presidents, the Archbishops of Luxemburg and the Principality of Monaco, the Archbishop of Cyprus of the Maronites, the Bishop of Chişinău (Moldova) and the Eparchial Bishop of Mukachevo. The current President is Cardinal Péter Erdő, Archbishop of Esztergom-Budapest, Primate of Hungary, the Vicepresidents are Cardinal Angelo Bagnasco, Archbishop of Genoa, and Mons. Józef Michalik, Archbishop of Przemyśl, Poland. The CCEE Secretary General is Mons. Duarte da Cunha. The Secretariat is located in Sankt Gallen (Switzerland).