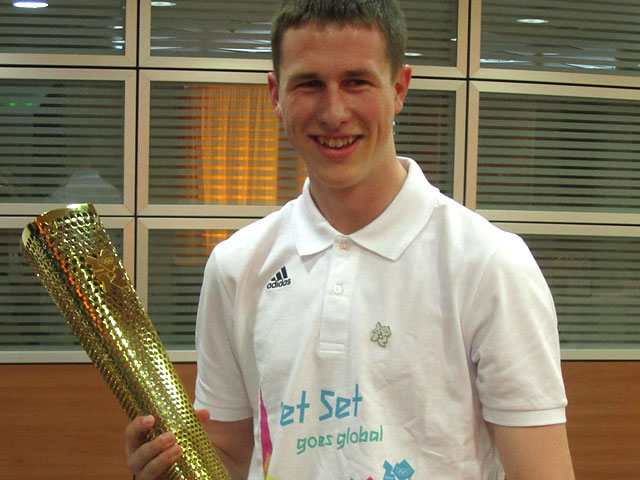 Sean White, a pupil at Bishop Vaughan Roman Catholic School in Swansea, was part of the delegation of five students from across Britain, in Athens last week to receive the Olympic Flame.

He was invited by the London Organising Committee of the Olympic Games and the Paralympic Games and the British Council to have a major role, carrying the Union Flag in the hand-over ceremony which took place in the Panathenaic Stadium in Athens, after a week-long relay around Greece.

Sean says: “At first I wasn’t allowed to tell anybody which was really difficult and I didn’t really know what we were going to be doing in Greece. However as the time got nearer and we were sent a full itinerary I started to realise that I was about to experience the trip of a lifetime. During the Ceremony we were presented with Olive Branches. This was a symbol of peace and friendship between people of different countries and represented the Olympic values.”

Sean continues: “While in Athens we had the opportunity to visit several Greek schools. I really enjoyed this because it gave me the chance to meet pupils of my own age from schools in another country. In the afternoon before the hand-over ceremony we received a telephone call telling us that a VIP had invited us to visit him at his hotel. You can imagine our excitement and amazement when we found out that it was David Beckham! He was really nice. He spoke to us at length, signed autographs and had his picture taken with each of us. He told us that he would be joining us at the Ceremony.”

Sean then flew back to the UK on the ‘Firefly’, flight BA2012, a plane that had been specially painted in gold, yellow and white to bring the Olympic flame back to the UK from the Greek capital. On the plane with him were Princess Anne, Lord Sebastian Coe, Boris Johnson, the Mayor of London, Hugh Robertson, the Minister for Sport and David Beckham.

The 17-year-old is known for his infectious smile and has been a keen athlete and member of the Swansea Harriers since he was 10 years old.

Sean said: “I am really excited about sharing my experience both in school and in the wider community and hope that this will help people to become even more excited and enthusiastic about the Olympic Games.”

Mr Joe Blackburn, Sean’s headteacher said: “This is a fantastic opportunity for Sean, whom we consider to be an excellent ambassador for our school and for the young people of Great Britain. Sean is a young man who embodies the Olympic values of excellence, respect for others and friendship.”

The delegation landed at RNAS Culdrose, the Cornish air base on Friday evening, ahead of the start of the torch relay last Saturday morning. After returning home, Sean said meeting David Beckham away from the cameras was something that he will always remember.