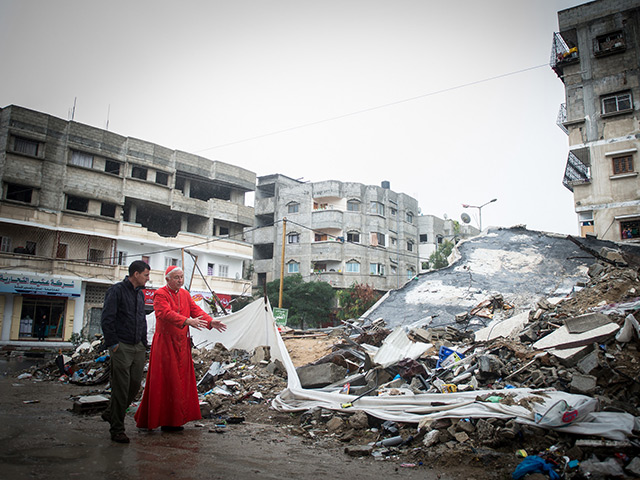 Cardinal Vincent Nichols made his first visit to Gaza on Sunday, 23 November, and described what he witnessed as “traumatic” and “shocking”.

The Cardinal, President of the Bishops’ Conference, was in the Holy Land for his diocesan pilgrimage to the region of Christ’s life and ministry.

Seeing first-hand the small Palestinian territory, scarred by the 50-day war between Israel and Hamas, Cardinal Nichols found himself shocked by a number of observations:

“I was told that more or less 50% of the people of Gaza have had their houses damaged or destroyed in this conflict. [Another] thing I found shocking was how endemic the poverty is of the ordinary people.

“There was very little constructive economic activity I could see. Many factories seemed to have been destroyed. What you saw on the streets were workshops where old spare parts of cars were adapted to keep the current cars going – a second-hand market.

“[There was a lot of] second-hand wrought iron work taken from the rubble and bricks recirculated, and the normal markets selling foodstuffs, fruit and vegetables, but that isn’t enough to sustain a population of 1.5m people.

“The poverty is a deep problem – especially when the birth rate is so high in Gaza – a whole generation of people are growing up in these circumstances.”

Cardinal Nichols celebrated Mass for the Catholic community of around 150 people at the Holy Family parish in Gaza City and visited an orphanage run by the Sisters of Mother Teresa where 38 children and babies are cared for.

Finally, the Cardinal visited the Rosary School, run by the Sisters of the Rosary, a kindergarten and an elementary school for about 800 pupils – the majority Muslims.

In his homily at Sunday Mass, Cardinal Nichols praised the parish community for offering the shelter of its compound to Orthodox Christians and Muslims during the conflict.

We have full audio of Cardinal Nichols’ reflection recorded just after his visit to Gaza and also the homily from the Holy Family parish church. Both are on Soundcloud. You can listen to two shorter clips posted to our audioBoom channel.

All audio is embedded to the right of this page.