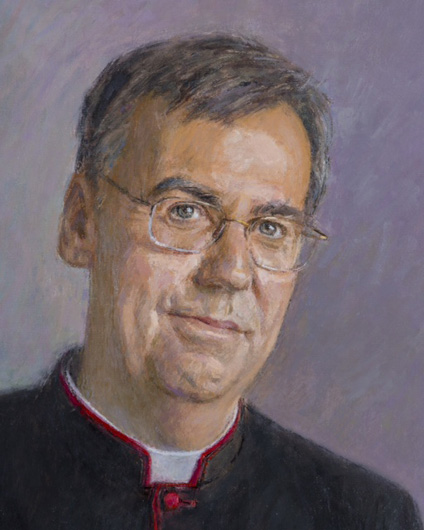 A new portrait will soon be on display in the corridors of the Venerable English College – the Bishops’ seminary in Rome for men training for the priesthood.

Cardinal Cormac Murphy O’Connor unveiled the portrait of Monsignor Nicholas Hudson, Rector from 2004 – 2013, at the annual reunion of the Friends of the Venerabile.

The reunion took place on Saturday, 14 September, at the Church of St Mary Moorfields in the City of London.

The Cardinal, himself a former rector of the college, is President of the Friends of the Venerabile and paid tribute to Mgr Hudson’s work as Rector.

Mgr Hudson is currently embarking on a brief sabbatical as chaplain to L’Arche community in France prior to taking up his appointment as Parish Priest of the Sacred Heart, Wimbledon.

The portrait of Mgr Hudson was painted by celebrated artist Michael Noakes, and was paid for by donations from the Friends.

The Cardinal also praised the great contribution made by Jo Barnacle, retiring as Chairman of the Friends after 20 years’ service.

The Friends of the Venerabile were founded in 1985 to support the Venerable English College, Rome with prayers and encouragement. Since their foundation, the Friends have donated over £250,000 towards the College and its retreat house at Palazzola just outside the city.

The English College is the oldest English institution outside England, founded in 1362. It is a seminary training priests for the dioceses of England and Wales. When the College resumes at the start of October it will have some 45 students in residence.

Michael Noakes was born in 1933, and educated at Downside School. He has been President of the Royal Institute of Oil Painters and Chairman of the Contemporary Portrait Society.

He is a member of the Royal Society of Portrait Painters and a Freeman of the City of London. His work in recent years has included acclaimed portraits of Pope Benedict XVI, Cardinal Murphy-O’Connor, and members of the Royal Family.

vecrome.org
Official website of the Venerable English College in Rome