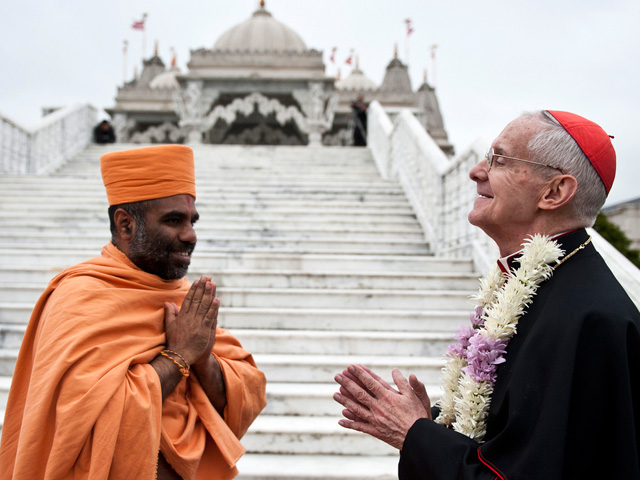 The first official engagement of Cardinal Jean-Louis Tauran’s four-day visit to England was a visit to a Hindu Mandir – temple – on the outskirts of London.

Having received the traditional welcome at the bottom of the temple’s main steps, Cardinal Tauran was escorted around the Mandir by Pujya Paramtattva Swami.

The Cardinal met with monks before making the short journey to the conference rooms to take part in a Hindu-Christian seminar titled: ‘Catholics and Hindus: The Practice of compassion as a contribution to peace’.

The seminar opened with both Hindu and Christian prayers before Pujya Satyavrat Swami’s opening address and Cardinal Tauran’s keynote speech.

The visit concluded with the exchange of gifts.

When made available, speeches from the visit to the BAPS Shri Swaminarayan Mandir in Neasden can be downloaded from the top right-hand corner of this page.

londonmandir.baps.org
BAPS Shri Swaminarayan Mandir in Neasden, London was created by His Holiness Pramukh Swami Maharaj, the fifth spiritual successor of Bhagwan Swaminarayan and the current leader of BAPS Swaminarayan Sanstha (BAPS), a worldwide Hindu organisation rooted in the Vedas and dedicated to the service of society.