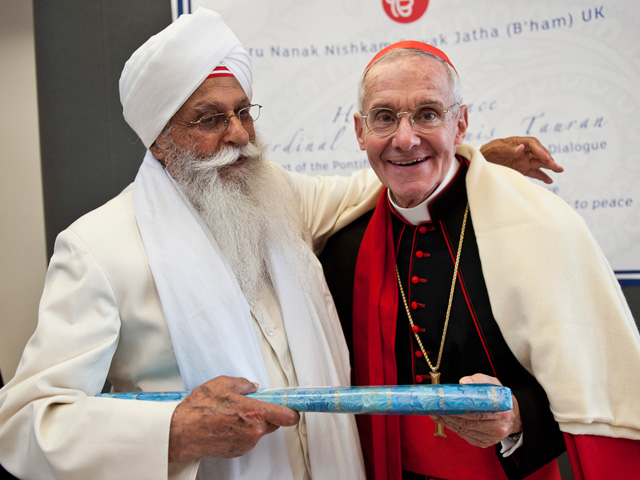 On the penultimate day of Cardinal Tauran’s four-day visit to England to promote good relations between religions, the visiting delegation travelled to the Midlands to meet with the Sikh community at the Guru Nanak Nishkham Sevak Jatha in Birmingham.

Dr Bhai Mohinder Singh, Chairman of the Gurdwara in Handsworth, greeted Cardinal Tauran, the Pope’s senior advisor on interreligious dialogue and led a tour around the Sikh temple.

The Most Rev Bernard Longley, Archbishop of Birmingham was present alongside Archbishop Kevin McDonald, Chair of the Bishops’ Conference Office for Interreligious Relations. Also in the party were Prof Gavin d’Costa, Professor of Christian Theology at the University of Bristol and Bill Ozanne who has worked in the area of interreligious dialogue locally, nationally and internationally for many years.

The tour of the Guru Nanak Nishkham Sevak Jatha was followed by a seminar on Catholic-Sikh relations titled ‘Catholics and Sikhs: Service to humanity as a contribution to peace’.

This exchange was the fourth bilateral Sikh-Catholic dialogue.

After Cardinal Tauran’s address, talks were given by both Sikh and Christian academics before the visit concluded with the exchange of gifts.

Addresses from the visit to the Guru Nanak Nishkham Sevak Jatha (Sikh temple) in Birmingham can be downloaded to the right of this article.