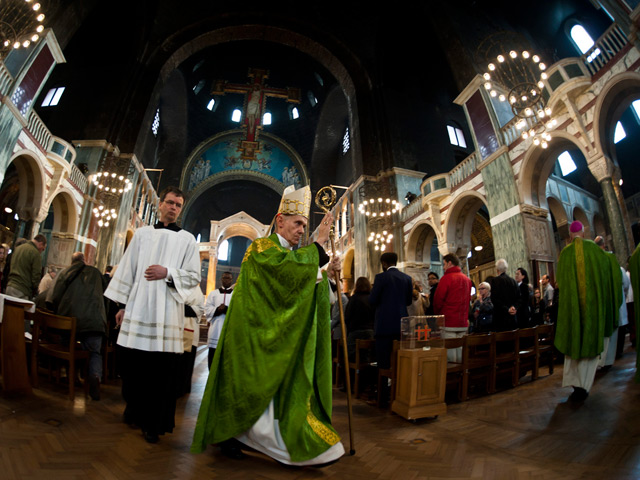 Cardinal Tauran’s four-day visit to the UK concluded back in London this morning with the celebration of Holy Mass in Westminster Cathedral.

In his homily, the Cardinal, President of the Vatican’s Pontifical Council for Interreligious Dialogue, took the opportunity to thank his hosts for a memorable visit that saw his delegation visit a Hindu Mandir, a Jain Derasar and a Sikh Gurdwara.

A major highlight was an evening of prayer for peace with representatives from the world’s major religions in Westminster Cathedral Hall.

Addressing Cathedral Mass-goers and guests, Cardinal Tauran echoed his words of the previous afternoon at a service of Vespers in St Chad’s Cathedral, Birmingham.

Describing the dialogue between religions as “educative and enriching” the Cardinal said:

“Holy Mother the Church exhorts us Christians, in the words of Pope Francis, ‘to promote interreligious dialogue as a catalyst for efforts to build peace… to build bridges connecting all people, in such a way that everyone can see in the other not an enemy, not a rival but a brother or sister’ (Audience with the Diplomatic Corps accredited to the Holy See, 22 March, 2013).

“As the President of the Pontifical Council for Interreligious Dialogue, I encourage you all my dear friends to build up cordial relationships with your neighbors, colleagues and others belonging to other religions to promote the cause of peace.”

Cardinal Jean-Louis Tauran’s homily given at Holy Mass in Westminster Cathedral can be downloaded to the right of this article.