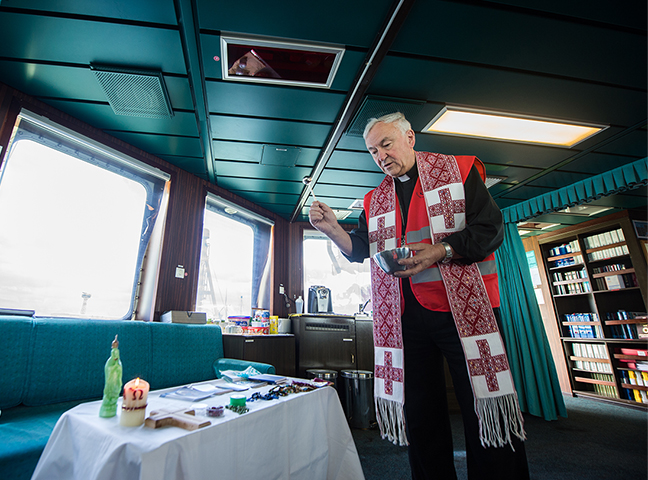 Cardinal Vincent Nichols paid tribute to seafarers, chaplains and ship visitors at Tilbury Port last week in a visit organised by Apostleship of the Sea.

The Port of Tilbury is located on the River Thames at Tilbury in Essex and is the principal port for London; as well as being the main United Kingdom port for the importation of paper. There are also extensive facilities for containers, grain, and other bulk cargoes. It is estimated that 95% of the goods consumed in the UK come in by sea.

Cardinal Nichols met with AoS chaplains and volunteers before going on to the Arklow Wave, an Irish ship which was shortly to depart for La Coruna with 13,200 metric tonnes of grain. He then met with the crew of Don Pasquale, a Singaporean ship mainly crewed by Filipino seafarers. After a tour, Captain Winston Laurel introduced the crew, for whom the ship is home for six months at a time.

“Good food makes the ship, so the cook’s job is the most important one. Is very important that there is a good atmosphere on the ship and at sea we are like a family. But when we come into port, often after a long time at sea, it is important that we have the support of Apostleship of the Sea and other groups,” he said.

The Cardinal spoke with individual crew members before praying with them. “We ask God our father to bless this vessel; bless their families wherever they are and keep all the crew safe in their work. We ask Mary to protect us as well.

“It is a great privilege to stand here and understand a little of how you live, how you create a family on board and how you earn the money for your families. I want to express my respect for what you do, often in difficult and dangerous waters, away from your families. I will pray for you as you travel round the world. I would also like to take this opportunity to pay tribute to the support offered by all who work with Apostleship of the Sea; this is important work and clearly valued by all those crews served by the chaplains and volunteers.”

He then blessed rosaries and prayer cards that the crew of 22 had brought.

The visit took place in the lead up to Sea Sunday, on July 12. On this day the Church remembers seafarers and prays for them, their families and those who support them, including the Apostleship of the Sea whose chaplains and ship visitors provide practical and pastoral help in ports around Britain.

On Sea Sunday churches take up a second collection with all funds raised going to the Apostleship of the Sea to support its work.

about Sea Sunday, including resources for parishes, the Vatican’s Sea Sunday message and a video clip can be downloaded at apostleshipofthesea.org.uk/sea-sunday

For pictures of Cardinal Nichols’ visit, which can be downloaded, can be found here: flickr.com/photos/catholicism