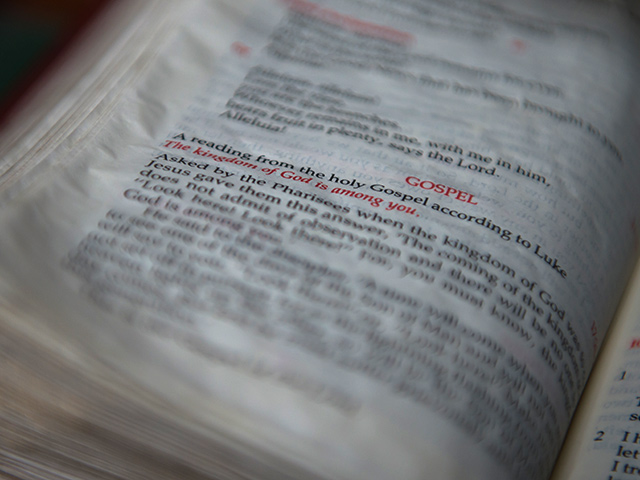 In his opening address at today’s, Tuesday 10 November,  National Catholic Bible Conference in Manchester to mark the 50th anniversary of the publication of one of the most important Catholic documents on the Scriptures, Cardinal Vincent Nichols invited all Christians to be renewed in their love and appreciation of the Bible.

Speaking to leading Bible scholars and local church leaders from across England and Wales about Dei Verbum, the Dogmatic Constitution on Divine Revelation of the Second Vatican Council, His Eminence said: “Dei Verbum encourages all Christians to treasure the pages of Scripture, to learn from them, to pray with them, and to live according to their teaching. We are a people fed both by Word and Sacrament. Pope Emeritus Benedict XVI, in Verbum Domini, the document written in the wake of the 2008 Synod on the Word of God in the Life and Mission of the Church, wrote that he longs for a ‘new season of greater love for sacred Scripture on the part of every member of the People of God’ (72). The agenda for the next fifty years must surely be to make this new season a reality in our lands.”

The three-day Bible Conference, which brings together close to 100 people, is themed Open Minds, Burning Hearts and has as its focus the Gospel of Luke, which is also known as the ‘Gospel of Mercy’.

Cardinal Nichols, looking ahead to the forthcoming Year of Mercy that Pope Francis will open on 8 December,  also made an invitation today for everyone to listen to the Gospel of Mercy:  “In Misericordiae Vultus (13) Pope Francis declares: ‘In order to be capable of mercy, therefore, we must first of all dispose ourselves to listen to the Word of God.’ The gospel of mercy which lies at the heart of the Bible will ‘bring a word and gesture of consolation to the poor, proclaim liberty to those bound by new forms of slavery in modern society, restore sight to those who can see no more because they are caught up in themselves, and restore dignity to all those from whom it has been robbed.’ (16).”

The Bible Conference is delivered as a partnership between Bible Society and the Bishops’ Conference of England and Wales’ Scripture Working Group, and includes input and reflection from Dr Ian Boxall (Catholic University of America, Washington DC) and a number of Bible-focussed workshops, seminars and time for prayer. James Catford, CEO of Bible Society said: “Pope Francis has recently written movingly about his love for his Bible, describing it as his ‘most prized treasure’. As we celebrate together the gift of Scripture on the 50th anniversary of Dei Verbum, my hope and prayer is that all Christians will grow in deeper devotion and attention to the Bible.”

Conference attendee, Sarah Beresford, from the Catholic Bible School, said: “This anniversary and gathering is a wonderful opportunity to celebrate the joy of encountering Jesus in the Bible.” Meanwhile, Fr Tim Swinglehurst, from Leeds Diocese said: “I’m delighted to be at the Conference. It provides space to deepen our understanding of the Gospels so that we can share the Good News of Our Lord with others.”

The conference programme will include 2 minutes silence on 11 November at 11am, followed by a Service of Remembrance later that day.

Bishop Peter Brignall (Wrexham), representing the Bishops’ Conference Department for Evangelisation and Catechesis, will preside at the final Mass of the conference, during which delegates will be invited to renew their commitment to sharing the Scriptures where they live and work.