The national Catholic University of Notre Dame, Indiana (rated as one of the top 25 institutions of higher learning in the US News and World Report survey of America’s best colleges) wishes to formally recognise the Cardinal’s “life-long devotion to the unity of the Church and to ecumenism, your witness to the Gospel, and most recently to the problems caused by the movement of peoples. So many of your accomplishments reflect what we hold out to our students as ideals for Catholic Christians.” His Eminence, Cardinal Sean O’Malley will be honoured at the same ceremony for his work in Boston.

One of the oldest Jesuit Catholic universities in the United States, Boston College (Massachusetts) also wishes to recognise the Cardinal’s “powerful example of faith, pastoral care, and commitment to Roman Catholicism. As Archbishop of Westminster and head of the Catholic Church in England and Wales, you have provided spiritual leadership for millions of Catholics for decades. Your more than 50 years as a priest and your work on behalf of the disenfranchised, undocumented workers, and migrants have made a difference in the lives of so many, especially the less fortunate.” 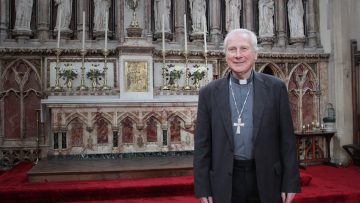