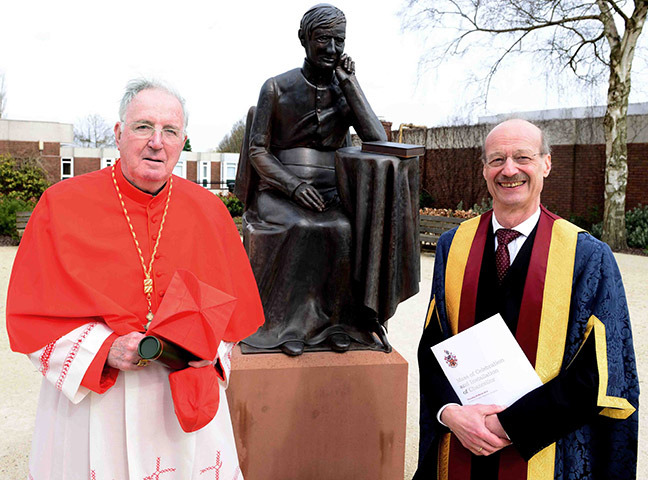 Newman University continues its celebration of full university title with the installation of Cardinal Cormac Murphy-O’Connor as its first Chancellor. As formal head of the University, he will take on a largely ceremonial role, carrying out ambassadorial and representative duties.

Commenting on his appointment, Cardinal Murphy-O’Connor said: “It is a great honour for me to be invited to become the first Chancellor of Newman University. In accepting, I am conscious of the admiration and devotion of so many people to the university Patron, Blessed John Henry Newman and I look forward to working with the University.”

Addressing the congregation, the Cardinal continued: “To Newman, the university was about more than just qualifications, it was for a gentleman and gentlewoman to have “eyes on all (his/her) company; (to be) tender towards the bashful, gentle towards the distant, and merciful towards the absurd; (s/he) can recollect to whom he is speaking; guards against unseasonable allusions, or topics which may irritate; s/he is seldom prominent in conversation, and never wearisome.”*

“In other words, a university education’s primary objective is to shape the whole person; to cultivate the virtues and to leave an indelible mark on the mind and soul. I know that this is what Newman University does – it prides itself on developing the whole person and prepares you for life after graduation – and I pray that it will leave a mark on your soul and get you ready to have “eyes on all (your) company” when you leave the shores of this campus to pursue whatever your definite purpose in life may be.”

Archbishop Bernard Longley, led the opening prayer and Archbishop Kevin McDonald preached the homily at the Mass of Celebration and Installation.

In his homily, Archbishop McDonald, Chair of the Bishops’ Conference Committee for Other Faiths and of the Committee for Catholic-Jewish Relations, drew attention to the fact that Newman University is a popular choice for young people of other religions:
“Newman University is a Catholic foundation but one which welcomes students who belong to other Christian Communions, other faiths and people without religious affiliation. What I find both interesting and encouraging is that Newman University is, I understand, a popular choice for young people of other religions. I would like to think that part of the reason for that is the outreach and openness to other religions that has developed within the Catholic Church since the Second Vatican Council’s Declaration on Non-Christian Religions, Nostra Aetate, the 50th anniversary of which we celebrate next year.”

And concluded by affirming the University in its new choice of Chancellor: “Cardinal Murphy O’ Connor is someone who over many years has sought to inspire people and communities to grasp opportunities and to have a vision for the future. He is the right person to be Chancellor of Newman University. With the election of Pope Francis, it seems to me that the Catholic Church is finding its bearings and finding new confidence in its role in the world.”

Archbishop Emeritus Kevin McDonald’s homily can be downloaded from the top right hand corner of this page.