Our agency for overseas Aid and Development, CAFOD, hosted its annual Pope Paul VI Memorial Lecture on Friday 18 October, as Fr Agbinkhianmeghe E. Orobator SJ, Provincial of the Eastern Africa Jesuit Province, gave a talk entitled A billion reasons to believe in Africa: The long march from ‘the hopeless continent’ to ‘the spiritual lung of humanity’.

Held at King’s College London, the talk was chaired by BBC radio journalist Shelagh Fogarty with around 400 people in the audience.

Giving the lecture, Fr Orobator focused on harmful stereotypes of Africa and the resilience of the continent in the face of such negative portrayals.

He identified reasons to be hopeful and showed what Africa brings to the world, without ignoring the challenges that face and undermine the continent’s march to progress. Religious intolerance and poor leadership are just two of the issues which still need to be tackled.

“A crucial task facing the continent of Africa is to construct an image of itself and generate an agenda of development worthy of the belief, trust and investment of Africans and the global geopolitical fraternity.

“In spite of harmful stigmatization and stereotypical portrayal, Africa has defied formidable odds and demonstrated resilience and resolve borne on the courage and hope of a billion people.

“As should be clear, belief in Africa is first and foremost belief by Africans in Africa! The obstacles to progress are many. Yet the claim of a billion reasons to believe in Africa is not, as might at first be feared, fanciful and delusive; there is ground for a future full of hope.”

In his opening address, CAFOD Director Chris Bain thanked the Catholic community for their continued generosity, which enabled CAFOD to spend £39m on its international work alone. He paid tribute both to the hundreds of Religious women and men who marched on Parliament and lobbied over 60 MPs to commit to the IF campaign, and the thousands of CAFOD supporters who were in Hyde Park for the rally.

“CAFOD’s church partners are some of the few humanitarian actors able to provide assistance on both sides of the conflict lines inside Syria, as well as alongside Caritas Lebanon,” said Mr Bain. “The Catholic community has once again been wonderfully generous raising over £2m.”

Fr Orobator is an eminent author, theologian and lecturer from Nigeria. He is currently serving in Kenya as the Provincial of the East Africa Jesuit Province.

You can watch a podcast interview with Fr Orobator, recorded a few days before the lecture here at the Bishops’ Conference, by using the embedded player above. 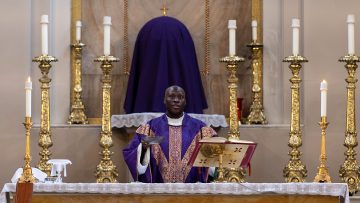 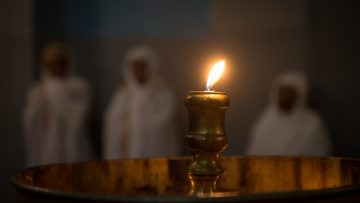