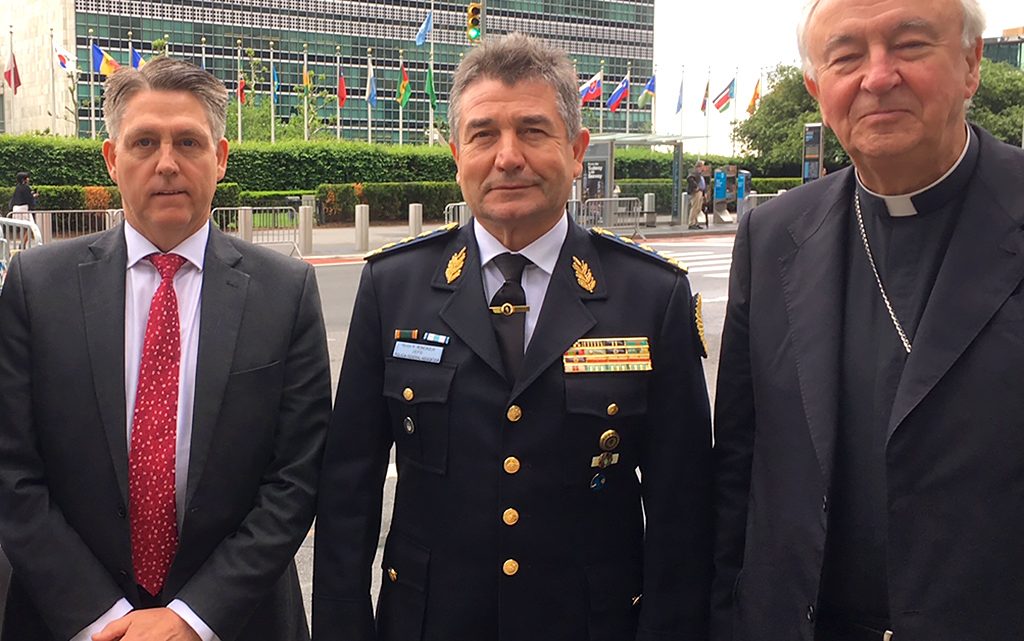 Trust is the key component in fighting human trafficking was the central message from Cardinal Nichols to delegates at a United Nations conference this week.

The Cardinal was addressing diplomats, law enforcement officials and charities involved in the support of survivors of human trafficking as president and chair of the Santa Marta Group. The UN’s Path to Peace initiative bestowed its annual award to the Santa Marta Group this week at a ceremony in New York.

“This is an evil crime on an international scale and, as a former commissioner for the Metropolitan Police said, it requires a concerted international response, and that is where the Church comes in. I couldn’t say that but that is what police chiefs see and is why this Santa Marta partnership is growing and seeing results locally,” said Cardinal Nichols.

“Not only is the Church active across the world, and we must salute the religious women who lead on this, but also victims of trafficking are often hidden within migrant communities. These communities can look out for possible victims and also those victims will often go to the Church as a trusted place where the first steps can be taken towards their rescue. Traumatised victims will trust religious sisters and that first step is essential.”

This focus on trusted relationships was at the heart of Sr Melissa Camardo’s address to the UN. She is one of the religious women who run the Lifeway Network, an inspiring charity that rehabilitates victims in a similar way to the work of Bakhita House in London.

In the collaboration between police and the Church trust is also being built. For the necessary leadership and accountability this trust is essential.

“Building trust takes time. It requires an honest assessment of failures as well as successes. Hearing police chiefs and Church leaders admit to failings demonstrates progress. We should not be afraid; we should have less fear about reputation, said Cardinal Nichols.

“We need to recognise that organised crime is precisely that: organised. We are not. We need to develop these relationships and ensure the best local response by effecting and developing the resources of the Church and police across the world.

“To combat trafficking which exploits people, treating them as an expendable commodity where profit is the only motivation, requires a more powerful motivation. That motivation has to be a radical commitment to the human.”

President of the UN General Assembly Miroslav Lajcak met with The Santa Marta Group and praised their approach.

“This is a surprising alliance but effective,” said Mr Lajcak.

During their visit to New York, Cardinal Nichols and Mr Hyland met with business leaders, focussing on the need to re-humanise their businesses. This need to put ethics at the centre of their business is both in ensuring slavery-free supply chains and also examining their fundamental business purpose.

The Santa Marta Group also met with director of the UN Office for Drugs and Crime Simone Monasebian, who heads up the office with lead responsibility for the UN on trafficking, as well as assistant secretary-general victims’ rights advocate Jane Connors.

In addition to encouraging co-ordinated action at the UN, Cardinal Nichols spent a morning with religious women, Catholic charities and US Immigration and Customs officials (who take the law enforcement lead on combatting human trafficking) in New Jersey listening to their work on the ground.

To find out more about the Santa Marta Group go to santamartagroup.com

Following initiatives by the Catholic Bishops’ Conference for England and Wales (CBCEW), the Santa Marta Group was developed by the CBCEW and first met in Rome during April 2014 when police chiefs and Catholic bishops came together, in the presence of Pope Francis, to sign an historic declaration, committing themselves to a partnership to eliminate human trafficking.

Named after the home of Pope Francis, in which the members stayed, the Group now has members in over 30 countries.

Through a series of conferences, the Bishops’ Conference has brought together the heads of national and international police and law enforcement agencies along with international organisations to look at how they can work with the Church to help victims.

The Santa Marta Group works by bringing together decision-makers so that they can share experiences, learn from each other and find solutions to the grave criminal challenge posed by human trafficking.

The Group is a medium in which trusted relationships are made, which then allow for cooperation and practical answers to be generated.

Each member is independent and what unites them is a mutual respect and desire to work together to tackle the slavery and trafficking problem. Creativity, imagination and flexibility are the characteristics of this overall partnership, along with a determination to place the needs of victims at the centre of their response.

The Santa Marta Group is thus a method and a meeting place for finding creative shared responses to criminality and the ills it causes.

The Group does not try to impose a single solution to a complex and transnational issue but rather brings together the skills, wisdom and experience of its members who work in very different national contexts.

The SMG helps share that learning and experience to create partnerships and coalitions to tackle slavery and trafficking and by that makes a difference.

The main objectives of the Santa Marta Group are to:

1. Raise awareness about the nature and scale of slavery;

2. Develop trusting relationships amongst law enforcement agencies, the Church and civil society across the world;

3. Animate those relationships so that they result in practical collaboration, improved public policy, legislation, law enforcement and pastoral care for victims;

4. Help put the care of victims at the centre of law enforcement approaches to trafficking;

5. Share experiences, best practice, and skills amongst SMG members to improve prevention of trafficking, pastoral care for victims, including empowering their reintegration in society and the prosecution of criminals;

The following practical actions will ensure we can achieve these objectives:

Developing and maintaining a programme of projects, initiatives, events and relationship-building to meet the pastoral and law enforcement challenges of human trafficking;

A permanent secretariat responsive to the needs of members;

Developing and commissioning applied research and a research network