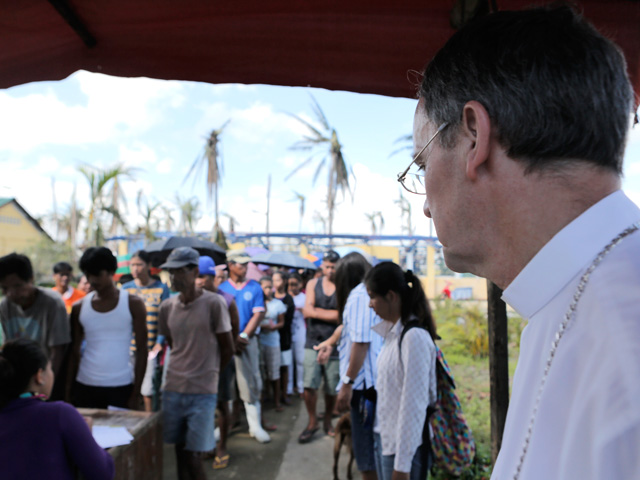 Having returned from a solidarity visit to the Philippines, Bishop John Arnold, Chair of CAFOD, made a final blog post looking back on the six days he spent visiting the stricken Filipino communities in some of the worst-hit areas:

Back in Westminster, with the trip now over but still very fresh in my mind, it helps me to look back as objectively as I can on those days in the Philippines.

What was most striking?

What are the most abiding memories?

I can think of four aspects of the trip which immediately come to mind as memorable, for very different reasons.

In the first place, I think that the sheer courage and resilience of the people made the trip quite unique. How could they remain so calm and grateful in the light of all that they had suffered and with all that now has to be done in recovery? I have never been to a disaster area before, but this reaction struck me as quite wonderful. This was confirmed by the stories of other disasters that I heard from the people who travelled with me last week.

There were all too many accounts from aid workers of aggression, intimidation and the survival of the fittest, especially at the distribution points. In a way that reaction in the face of such calamity is understandable. We witnessed only a calm and thanks from people who quietly waited in line for what they were so appreciative to receive. It is true that this was three weeks after the disaster but we were witnessing the first distributions to people who might well have demonstrated real frustration, but they did not. In the little community on Hilantagaan Island, where the homes were in ruins, with walls caved in, roofs collapsed, the people were sweeping the streets and even sweeping the beach and speaking in such a matter of fact way about what they had lost and the work that now had to be done.

But there was no hint of anger or despair. This atmosphere made for a sense that the recovery will be full of hope and determination and will gather momentum. But I am left asking what quality allows them, as whole communities, to think in this way? How can they be like this – not just individuals but everyone we met without exception. I come to the conclusion that it is a deep-rooted, and enviable, religious faith which invites a trust and a hope for the future. It was remarkable that such an emphasis was put on restoring the churches. I would have placed them as a much lesser priority than the need for housing and the repair and provision of electricity and sewerage systems.

I came to realise, in the various discussions, that the churches were not only vital meeting places but they represented a focal point for people’s lives, both spiritually and socially. They represented well-being. Their rebuilding is something that the various aid agencies are unlikely to fund believing, rightly or wrongly, that such buildings are only of secondary importance. Palo Diocese lost seventy of its parishes churches.

Secondly, there was the sense of collaboration among the various Caritas agencies that seemed to be a key value in the success of the relief work. The day long meeting that I attended for the representatives of the nine affected dioceses, civic authorities and Caritas agencies demonstrated a sense of a united effort to meet the needs of the crisis. A similar sort of meeting takes place each Monday which allows for an investigation into the progress of the work, highlight any duplication of effort and also makes sure that no community is being left out in the relief work. It represents a very effective response of the Church throughout the world and putting into effect the generous response of people and their giving in time of a crisis. Throughout the five days we met with so many people from any number of Caritas agencies all working together. It spoke very clearly to me of a sense of the Gospel in action, something which Pope Francis continually urges.

The third element of the reflection concerns the children. I remember Archbishop John of Palo Diocese describing the three hours when the typhoon was in full strength and how he went from one building to another seeking safety. But the thing he remembered most clearly was the terrified screams of the children. I was afraid that I would hear much more about traumatised children and something of the lasting effects of their experience. I was very encouraged, therefore, to visit the school on Friday morning to find five hundred children laughing and playing and settled with determination into their studies, despite their school buildings being in ruins. What a friendly welcome they gave me. Their smiling shyness was so reassuring. Yes, I am sure that there will be some who will have nightmares because of what they witnessed but there does not seem to have been any collective and lasting trauma.

Finally, I found it curious that even at a little distance from such devastation, things just seemed to carry on as normal. Cebu City was busy about its own daily business, with shops, restaurants and hotels all full and the roads packed with traffic. Just up the road, almost I suppose within commuter distance, life had been drastically changed with loss of livelihoods and homes and, for some seven thousand people, the loss of life. There would be no question in my mind that the people who were not directly affected did not care, quite the opposite. But life has a way of going on. What is so important is that we should be made well aware of what is happening when such awful events occur and recognise that we have a role, and a responsibility, in helping the recovery.

There are many other memories, of people’s courage, of humour and kindness, of generosity and determination. As we begin this new year in the life of the Church in this Season of Advent, they are a good challenge to me, too.

Was there purpose in making the journey to the Philippines last week? I am sure there was. It is difficult to measure but it was right that the connection was made and that the people who have lost so much and who face such a challenging time of recovery should know that they are not forgotten. The many people that I met made it very clear that it was just so important to them that someone had come to see them. It was important, too, that so many Filipinos in this country should know someone of the Church could represent them and their concerns, since they could not make the journey themselves.

As I come to a close with this diary of my trip to the Philippines, I am only too aware that there are more than four million Syrians facing dreadful hardship, as refugees, and that progress in alleviating their suffering is hampered because of the continuing violence and lack of security.

There are all too many other places in our world where there is so much to be done so that people may live in peace, with dignity, free from poverty. Are we doing anything like enough to help? Sadly not, despite some heroic efforts. That remains the challenge. It’s Francis’ challenge to us.

rcdow.org.uk/diocese/bishop-john-arnold
Read Bishop John Arnold’s blog diary from the areas worst-hit by Typhoon Haiyan by visiting his profile page on the Diocese of Westminster’s website. Use the blog menu on the left-hand-side.

blog.cafod.org.uk/tag/john-arnold/
CAFOD’s blog also carries posts from its Chair on the visit to the Philippines.

flickr.com/photos/catholicwestminster
The image that accompanies this article comes from the Diocese of Westminster’s Flickr stream. View more photos on the link above.