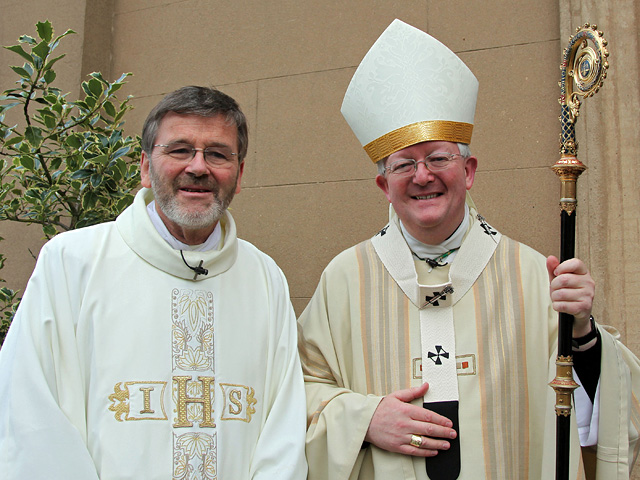 The Archbishop of Birmingham, the Most Rev Bernard Longley, paid tribute to Fr Patrick Daly during his farewell Mass as Parish Priest, at SS Peter and Paul in Wolverhampton, on the Solemnity of the Epiphany, Sunday, 6 January.

Fr Daly, a former Administrator of the Metropolitan Cathedral and Basilica of St Chad, Birmingham, is moving to Brussels to take up his appointment as General Secretary of COMECE – Commission of the Bishops’ Conferences of the European Community.

During his warm tribute the Archbishop of Birmingham, said:

“I am delighted to be with Fr Patrick Daly today, at this Mass of the Epiphany, as he prepares to take leave of the parish community at SS Peter and Paul in Wolverhampton, after 14 years as Parish Priest.”

“Fr Patrick’s new ministry in Brussels will now be established on the solid foundations of his long experience of pastoral ministry in Wolverhampton. This experience complements his extensive knowledge and understanding of European affairs.

“Fr Daly knows from first-hand experience the challenges and concerns that face people today in the West Midlands and this will help shape the priorities that he now brings to his service of the Catholic Church in the European Community.

“COMECE will benefit not only from Fr Patrick’s linguistic skills but also from his experience of the wide diversity of cultures and languages present in the city of Wolverhampton.”

The Archbishop of Birmingham added:

“Once again, I thank Fr Patrick Daly for all that he has done for this parish, for St Edmund’s School, for the University and the City of Wolverhampton over the last 24 years and I wish him every blessing in his new post overseas.”

The Archbishop said that a new Parish Priest will be appointed to take up responsibility for SS Peter and Paul in the summer.

It was a deeply moving and emotional occasion for Fr Patrick Daly and for members of the congregation who held him in such high esteem. These included past parishioners who came back specially to say their goodbyes to him in person.

During his homily, Fr Daly painted an encouraging picture of a “tremendous community effort and achievement” on behalf of the parishioners over the years, but one that had also included tensions, difficulties and tears.

A senior member of the congregation, Mrs Betty Green, Chair of Finance, spoke with great affection about Fr Patrick’s “devoted service to the parish”, and his “interesting and stimulating homilies”. Members of various parish organisations including the altar servers then gave cards and gifts to Fr Patrick Daly at the end of a memorable farewell Mass.

Fr Daly will take up his three-year post with the Commission of the Bishops’ Conferences of the European Community in January 2013.

Statement on the UK leaving the European Union