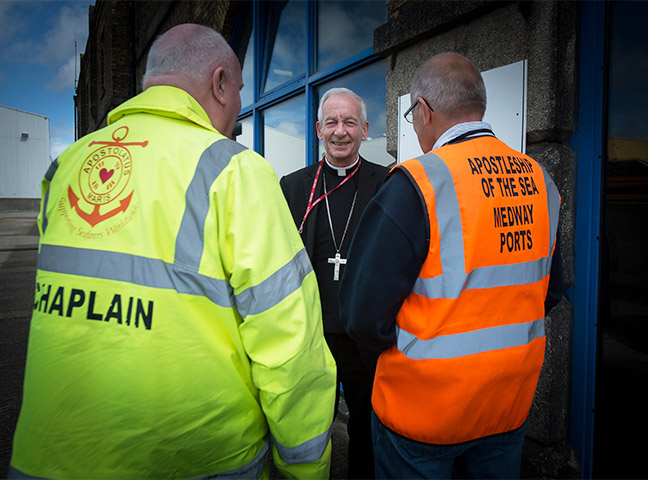 Archbishop of Southwark, The Most Reverend Peter Smith has launched and blessed a newly-refurbished centre for seafarers at the port of Sheerness in Kent.

The facility, operated by Catholic seafarers’ charity Apostleship of the Sea (AoS), is a sanctuary where visiting seafarers can spend quiet time in prayer, use the WiFi service to contact their families back home or relax with a game of pool.

Archbishop Smith said, “The centre is a great service to seafarers who are all welcomed here. It is a service the church provides and it has been blessed over the years by God’s grace. We ask God’s blessing for the future work of this centre.”

Archbishop Smith who is also Vice President of the Catholic Bishops’ Conference of England and Wales said his grandfather on his father’s side was a shipwright in Bristol, so the sea ran in his family’s genes.

“The ministry of AoS is great work and it’s done quietly,” he added at the opening ceremony held yesterday.

The restoration of the seafarers centre was made possible by a £4,130 grant by the Merchant Navy Welfare Board (MNWB). Each year about 5,000 ships visit ports in the Medway, which includes Sheerness Docks, with about 80,000 seafarers on board.

MNWB chairman Bob Jones who was also present at the launch said, “We are delighted to support Stella Maris (AoS) in the work you do for seafarers’ welfare both in UK and around the world.”

AoS’ port chaplain for Kent and Medway, Deacon Paul Glock said, “The Apostleship of the Sea is about not taking seafarers for granted, but making them feel welcome and appreciated and this is their little home.”

Paul and his team of ship visiting volunteers go on board ships to visit seafarers in Chatham, Dover Port, Gillingham Pier, Rochester, Sheerness Docks and Whitstable Harbour. These ports are all in Southwark archdiocese.

Many of the seafarers arriving at Sheerness and those other ports are Catholic, originating from countries such as Philippines, Poland and India.

Using the centre, AoS is able to provide them with pastoral and practical care. It is equipped with faith resources like scripture booklets and prayer cards. The centre offers them a space to speak to Deacon Paul, who provides a listening ear.

On rare occasions when ships are in port long enough the centre is also used as a meeting point for seafarers who wish to be taken to Mass.

It also offers amenities for them to communicate with family by internet or phone and space to relax before moving on to their next port of call.

The Apostleship of the Sea, AoS, is a registered charity and agency of the Catholic Bishops’ Conferences of England & Wales and Scotland. It is wholly reliant on voluntary donations and legacies to continue its work.

For more information contact John Green, Director of Development on 020 7012 8607 or email johngreen@apostleshipofthesea.org.uk