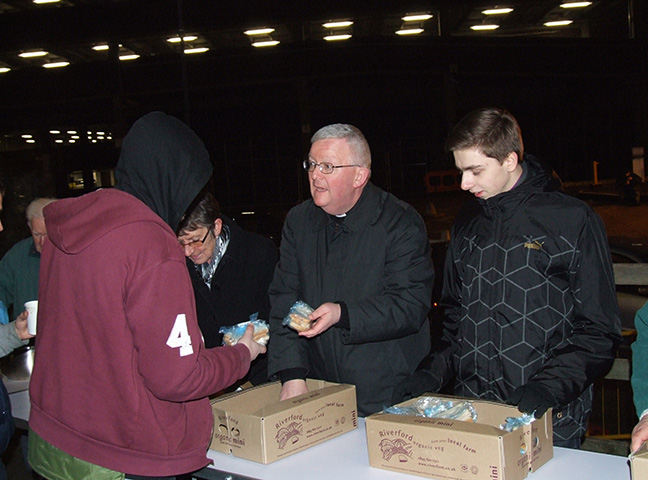 The Archbishop of Birmingham, the Most Reverend Bernard Longley helped volunteers from the St Vincent de Paul Society (a charity dedicated to tackling poverty and disadvantage) to distribute sandwiches and hot drinks at a Birmingham City Centre Soup Kitchen at the weekend. The Kitchen is open every night of the year to offer practical assistance and support to anyone who walks through its doors – between 70 and 140 homeless men and women visit the Soup Kitchen every night.

The Redditch St Vincent de Paul Society (SVP) supports the Soup Kitchen twice a month. Up to 12 volunteers from this local group help distribute sandwiches and hot drinks; sleeping bags, clothing and footwear to all those in need. Polish parishioners from Our Lady of Mount Carmel Catholic church regularly join the volunteering team to reach out to the many Polish and East European men who visit the Soup Kitchen.
This local group also has volunteers who bi-monthly walk the streets of Birmingham city centre seeking out men and women living in car parks; stairwells, doorways etc. who, for whatever reason, cannot – or choose not to – visit the Soup Kitchen. The volunteers travel armed with sandwiches, hot drinks, sleeping bags, basic clothing, ‘Vinnie-packs’ (which includes toiletries, hat, gloves, socks and a thermal blanket) and a sympathetic ear. The group is supported by a network of four parish schools – one of which – St Bede’s Middle School – has volunteered to make the 300 sandwiches needed for each Soup Kitchen for the next few months. The money to buy the ingredients comes from the many donations – both large and small – the Redditch St Vincent de Paul Society receives from generous benefactors – individuals and organisations, including significant contributions from AT&T.

Archbishop Bernard Longley said: “I was immensely grateful that I was able to join the members of the St Vincent de Paul Society last night at the Soup Kitchen venue at Moor Street in central Birmingham. I was very struck by the large number of people who came looking for help and by the wide range of needs that brought them there. The presence of these men and women night by night highlights the scandal of poverty in the heart of Birmingham and the responsibility that we all have not only to alleviate but to seek to prevent it.

“I am grateful that there are such places in our city where people in real need are able to receive a word of welcome and of Christian friendship, as well as some material support. I thank all those who regularly give so generously of their time and their goods to help their neighbour in a Christ-like way.”

One of the volunteers, Mrs Anne Glennon, added: ‘‘I responded to an appeal by our Parish SVP group for volunteers to help at a Soup Kitchen. I didn’t really know what to expect as we drove in to Birmingham city centre. On arriving we were met by over 100 men and women. They were desperate for the food and drinks we had with us. I could not believe that in this day and age so many people were so dependent on a Soup Kitchen in this country’s second city”.