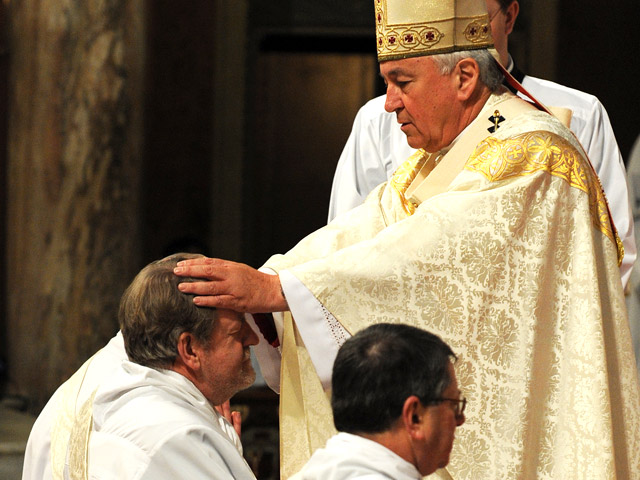 Many ordinations have taken place in this Cathedral during the 100 years of its history. But none quite like this. Today is a unique occasion marking a new step in the life and history of the Catholic Church. This morning the establishment of the first Personal Ordinariate under the provision of the Apostolic Constitution ‘Anglicanorum Coetibus’ has been announced in our hearing. So I too salute John Broadhurst, Andrew Burnham and Keith Newton who are to be the first priests of the Ordinariate of Our Lady of Walsingham. In particular I offer my prayers and best wishes to Keith, chosen by the Holy Father to be its first Ordinary.

This is indeed an historic moment. In these opening words I welcome you warmly, Keith, Andrew and John. You have distinguished pasts, full of real achievements. Now, ahead of you, you have an important and demanding future! In welcoming you I recognise fully the demands of the journey you have made together with your families, with its many years of thought and prayer, painful misunderstandings, conflict and uncertainty. I want, in particular, to recognise your dedication as priests and bishops of the Church of England and affirm the fruitfulness of your ministry.

I thank so many in the Church of England who have recognised your sincerity and integrity in making this journey and who have assured you of their prayers and good wishes. First among these is Rowan, Archbishop of Canterbury, with his characteristic insight, and generosity of heart and spirit.

This journey, of course, involves some sad parting of friends. This, too, we recognise and it strengthens the warmth of our welcome.

Of course it was John Henry Newman who spoke movingly of this ‘sad parting of friends’. We thank our Holy Father Pope Benedict for not only placing this Ordinariate under the protection of Our Lady of Walsingham but also for giving it Blessed John Henry Newman as its patron.

At Lambeth Palace, in September, Pope Benedict said: ‘In the figure of John Henry Newman we celebrate a churchman whose ecclesial vision was nurtured by his Anglican background and matured during his many years of ordained ministry in the Church of England. He can teach us the virtues that ecumenism demands: on the one hand, he was moved to follow his conscience, even at great personal cost; and on the other hand, the warmth of his continued friendship with his former colleagues led him to explore with them, in a truly eirenical spirit, the questions on which they differed, driven by a deep longing for unity in faith.’ (Lambeth Palace, 18 September 2010)

Then, speaking in Rome on 20 December, Pope Benedict reflected further on Cardinal Newman. He spoke these words. They are of relevance and hope for today:

‘The path of Newman’s conversions is a path of conscience – not a path of self-asserting subjectivity but, on the contrary, a path of obedience to the truth that was gradually opening up to him. His third conversion, to Catholicism, required him to give up almost everything that was dear and precious to him: possessions, profession, academic rank, family ties and many friends. The sacrifice demanded of him by obedience to the truth, by his conscience, went further still. Newman had always been aware of having a mission for England. But in the Catholic theology of his time, his voice could hardly make itself heard…

In January 1863 he wrote in his diary these distressing words: “As a Protestant, I felt my religion dreary, but not my life ‐ but, as a Catholic, my life dreary, not my religion”. He had not yet arrived at the hour when he would be an influential figure. In the humility and darkness of obedience, he had to wait until his message was taken up and understood. In support of the claim that Newman’s concept of conscience matched the modern subjective understanding, people often quote a letter in which he said – should he have to propose a toast – that he would drink first to conscience and then to the Pope. But in this statement, “conscience” does not signify the ultimately binding quality of subjective intuition. It is an expression of the accessibility and the binding force of truth: on this its primacy is based. The second toast can be dedicated to the Pope because it is his task to demand obedience to the truth.’ (December 20, 2010)

Today we thank the Holy Father for the courageous leadership he gives in establishing the first Personal Ordinariate. His intentions are clear. It is, as he has said, ‘a prophetic gesture’. It is to contribute to the wider goal of visible unity between our two Churches by helping us to know in practice how our patrimonies of faith and living can strengthen each other in our mission today. At Oscott College, the Holy Father said to us bishops: ‘It (the Ordinariate) helps us to set our sights on the ultimate goal of all ecumenical activity: the restoration of full ecclesial communion in the context of which the mutual exchange of gifts from our respective spiritual patrimonies serves as an enrichment to us all.’

The visible unity of the Church, then, is central to our thoughts today. Indeed, it was never far from the heart of St Paul as is well expressed in his Letter to the Ephesians and, a little earlier, to the Philippians. His appeal is steadfast: that believing in Christ as Lord, that sharing in one Spirit, that worship of one God and Father create a unity which must be constantly served by the practice of humility, gentleness, patience and love. In Philippians he is more explicit about the attitudes and behaviours that threaten this unity: selfish ambition for the power of office; the search for personal approval or prestige; a focus on the importance of self within a competitive spirit, all taking us away from ‘the mind of Christ Jesus’. (cf Phil 2.1‐5).

History shows how right he is. These patterns of failure mark our histories. They also find expression in the lives of each of us today. So we ask pardon for our failings and seek to renew within ourselves that mind of Christ Jesus himself.

The quest for the visible unity of the Church remains an imperative. In it the role of the successor of St Peter is crucial. Pope Benedict expressed it thus in Westminster Abbey: ‘Fidelity to the word of God, precisely because it is a true word, demands of us an obedience which leads us together to a deeper understanding of the Lord’s will, an obedience which must be free of intellectual conformism or facile accommodation to the spirit of the age. This is the word of encouragement which I wish to leave with you this evening, and I do so in fidelity to my ministry as the Bishop of Rome and the Successor of Saint Peter, charged with a particular care for the unity of Christ’s flock.’ (Westminster Abbey, 18 Sept 2010)

In his Letter to the Ephesians, St Paul speaks about the variety of gifts given to the community of believers. While recognising that variety, in this Mass we focus, in particular, on the gift of the ordained priesthood within the Catholic Church. It is a priesthood which takes it shape, its purpose, its experience from the Cross of Christ, the great cross above us, referred to so movingly by Pope Benedict. Through this ordained priesthood, the one, same sacrifice of Christ is made real at the altar and offered again to the Eternal Father. It is made present as the sacrament of our salvation. This Mass, every Mass, is at once the prayer of Christ and the prayer of the Body of Christ, his people. Through it Christ constitutes the Church afresh each day, both in Himself and in its visible unity, in the world. This is the work of the ordained priest – the daily constituting of the Church ‐ and it is a priceless gift and service for which we thank God constantly. To this one sacrifice we bring our own small sacrifices, the losses and hardships we carry through failure and sin, through the pursuit of truth and love, through the passing of time. All is offered to the Father in one sacrifice of praise to become a means of our salvation.

In today’s Gospel passage from St. John, we have heard again of the appearance of the Risen Christ to his disciples. At that moment he brought to them the fruits of his triumph over death: the forgiveness of sins and the gift of peace. Here too we come to the work of the ordained priest: to pronounce with confidence the forgiveness of God and to bring peace to a troubled soul and a troubled world.

To this service, to this ministry we welcome our three priests today. But we must be attentive to the words of the Gospel. In bestowing these gifts, the Risen Lord also employs an eloquent gesture: he shows them his hands and his side.

He shows them his wounds. The mission they receive, the mission of reconciliation, comes from the wounds of Christ. This is the mission we share and at every Mass we once again gaze on the wounded, broken body of the risen Lord. Our mission is characterised by woundedness: a mission to a wounded world; a mission entrusted to a wounded Church, carried out by wounded disciples. The wounds of sin are our business. The wounds of Christ, even though we have caused them, are also our consolation and strength.

The first to witness these wounds, the first, perhaps, to grasp their true significance, was Mary, Mother of Jesus. Standing at the foot of the cross she witnessed the inflicting of those wounds. Holding his dead body she must have been marked by the blood shed from them. Now she looks down on our new priests from the other side of this Cathedral crucifix above me. Mary always holds before us her Son, presenting him to us as our hope and salvation. Nowhere does she do so with more grace and elegance than in the image of Our Lady of Walsingham. As this Ordinariate, her Ordinariate, comes into being so may we entrust to her the work of bringing it to fulfilment.