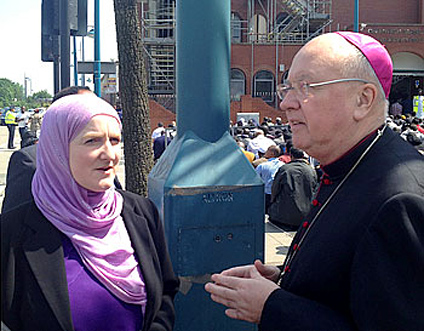 On Friday 31 May, Archbishop Kevin McDonald, in his capacity as Chair of the Bishops’ Conference Office for Interreligious Dialogue, joined several other faith leaders at the Woolwich Mosque in south east London as hundreds of Muslims gathered for Friday Prayers.

Archbishop McDonald stressed the importance of continued dialogue and for the different faith communities to work harmoniously for the common good.

The Archbishop’s words were well received by the Muslim Community – many of whom were visibly moved by his presence and message of solidarity.

“As leaders of different religions, we were invited to the mosque in Woolwich in the aftermath of the terrible events that took place nearby.

“It was an opportunity for us to show solidarity with them at a very difficult time. Both the worshippers and the leadership of the mosque were immensely appreciative of our visit.

“After greeting people, we had a meeting with the leaders at the mosque. We then proceeded to the barracks where we laid a wreath that simply said ‘Peace’.

“When asked by a reporter about my hope for the future, I said that my hope would be that out of this terrible tragedy we might be able to forge a much deeper culture of friendship as well as shared commitment to the common good among people of faith.”

Archbishop McDonald laid flowers with Imam Ali Omar at the site where Lee Rigby was killed.

*note: this link may expire in time