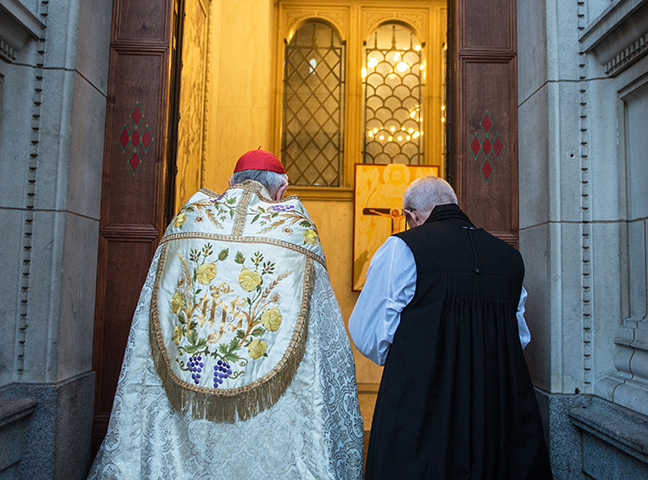 The Archbishop joined Cardinal Vincent Nichols for the closing of the Door of Mercy at Westminster Cathedral last night, Sunday 13 November. Archbishop Justin preached for the first time in the Cathedral at the service of Vespers.

The Year of Mercy has caught the imagination not only in the Catholic Church but in all churches in a year when the living of mercy has been very absent. Mercy is a word of immense beauty, an offering of infinite riches. When we walk through the door of mercy and allow its meaning to enter our hearts we become different people. Mercy is the gift that goes on giving, it works in us like a benevolent acid, dissolving the hardness of our hearts and the selfishness of our lives.

Pope John XXIII, in his visionary address to the Second Vatican Council, spoke of a movement of the Holy Spirit by which the church moved from acting in severity against error and sin to acting in mercy. This great Year of Mercy 50 years after the end of the Council has been received as water in the desert for global churches sadly lacking mercy, and must be offered as the way of living to a world which sees mercy only in terms of exchange, and never as the excess of abundant love.

Mercy has two aspects in the bible. It is a gift of God to us, by grace, to all his people, which must be received to be known, and the sign of its reception is our mercy which we show to others.

For me, a formative place in my own development and ministry was Coventry Cathedral. On November 14th 1940 Coventry Cathedral was destroyed in a bombing raid. In a moment which turned out to be prophetic the Provost wrote on the remaining wall behind the altar, “Father forgive”. From that moment arose a movement of reconciliation and mercy.

Pastoral experience tells us that the reception of mercy is the hardest step for many people. We begin, as human beings, with the sense that we need to earn mercy, to be found fit for forgiveness by God in order to achieve our higher purpose. Our repentance must be adequate, our penance sufficient, our new lives sin free. Because we find that none of that is possible, that our consciences accuse us of sin even as we repent, we become full of anger and despair, believing, but not enjoying the liberty of mercy, consumed with our own failure.

When this happens in a person or in a church then we turn against others. We criticise and bite and savage each other, turning from hope to despair, and from mutual up building to tear each other down. It is this hardness that is dissolved in the benevolent acid of mercy.

Paul knows this. He is writing to a church that is full of anger and very short of mercy. In I Corinthians we have found them selfish at the Eucharist, resentful of the successes of others, and condemning of those who do not fit their preconceptions of what it is to be an apostle. We see from reading that first letter that some people had come to Corinth telling the Christians that Paul was too much of a failure to be a real apostle. He suffered, was poor, had to earn his own living as a tentmaker.

It is not an ancient attitude only, although it very much reflects an honour and shame culture, which was openly the case in ancient Corinth, and is still the case, better concealed, today. I was told off recently for going on the underground, carrying my own suitcase. It showed I did not understand the dignity of being an Archbishop of Canterbury. Paul was told of for showing a lock if dignity. But Paul’s critics were not just, in the Foreign Secretary’s word of this week, indulging in a whinge-o-rama, but in a deadly attack designed to displace him.

He deals with it in the passage we’ve heard just now in gallant style, by boasting of his suffering and humiliation. He sets out that indeed he was suffering, in fact they have no idea how much he was suffering, but God gave mercy, and he was consoled. And in a moment of extraordinary beauty he links mercy and consolation as what we receive by grace and give in generosity, as both the gift that sets us free, and the duty to pass on[1].

The door of the year of mercy calls us back to both aspects, the invitation to receive mercy by grace and the duty to be a people of mercy. We do this by prayer, by coming confidently into the presence of God, and confessing our sins, in the sacrament of reconciliation, and then in contemplation of the mercy that we find in the Sacrament. As we meet with God through Jesus, by the Spirit, in prayer, then, in a phrase the Holy Father used to me in our discussion just over a month ago, he makes room in our lives for mercy and grace.

The door of mercy calls us through, but like the doors into Narnia in the CS Lewis series, what we find on the other side of the door is another world, where new rules apply, where the deep magic of the Kingdom of God is what prevails. We find ourselves in a world where we, having been consoled, are necessarily the bearers of consolation. It is not a word of ease and simplicity. Our sufferings in a world where mercy is our gift, to us and by us, are the sufferings of Christ. The church continues Christ’s work of mercy, it is entrusted to all of us and we are its ministers. Yet we can only do that when we ourselves are caught up by mercy, when we suffer and receive consolation.

Whether it is in our institutional lives of elections and referendums, or in the international politics of refugees, of trade and commerce, and even in our own lives and expressions through social media, mercy is often absent. We have seen that this year, and most in recent weeks.

Yet the Church, we, is the place that, as the Pope said on the same occasion, “Her doors remain wide open, what we close today is not closed before God” and “Do not forget that God forgives all, and God forgives always.”

Where is the source of consolation for the refugees, the persecuted, the hungry, the imprisoned, the dying? It is in mercy. Deep down human beings know that, thirst for that. How many of us end any day without needing mercy, both from God and often from those we love and hurt?

This is our gift, a gift to pass on in a merciless world, to be consoled consolers, not avoiding the suffering to which Christ calls us, rather offering mercy which heals, that brings character and hope, and offering that mercy with hands that are themselves filled with mercy from God, and out of the overflow of our own consolation.