Archbishop Bernard Longley reflects on the Synod of Bishops 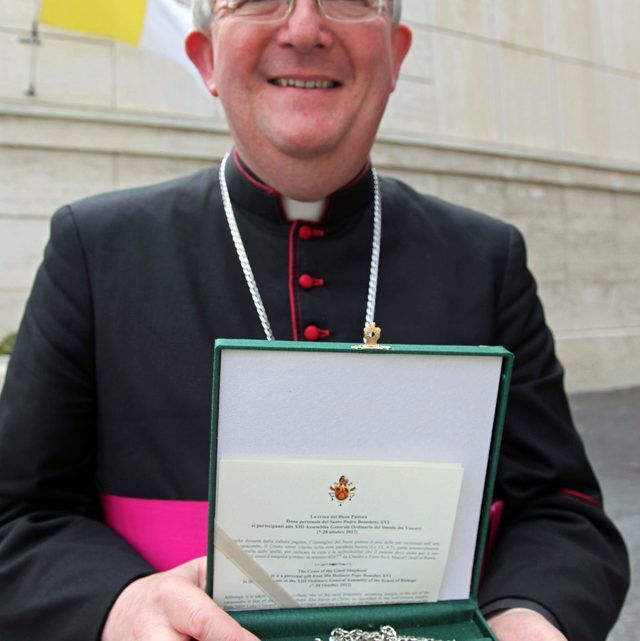 “As the Year of Faith enters its first month I believe the Synod on the New Evangelisation will have put fresh wind in the sails of each bishop as we return to our dioceses across the world,” said the Most Reverend Bernard Longley, Archbishop of Birmingham, a Synod Father and Relator of English Language Working Group B, on Wednesday, 31 October.

Asked for his initial thoughts about the International Synod of Bishops in Rome, Archbishop Bernard Longley said: “It was a remarkable and uplifting experience to spend the three weeks of the Synod in Rome with 262 bishops from every corner of the globe, united in prayer and reflection with Pope Benedict.

“This was my first – and could be my only – experience of a Synod of Bishops and I was struck by this very concrete expression of the Church’s catholicity. I also saw the wisdom of patiently listening to these experienced voices from every continent, sensing together the Church’s mission and the presence of the Lord in our midst.”

The Archbishop of Birmingham said: “I found it moving to be together with other bishops who have suffered with their people for the sake of the Gospel, or with Synod Fathers like the Jesuit Superior General, Fr Alfonso Nicolas, who brought a deep wisdom and fresh perspective to our discussions.

“The lay men and women together with the Religious Auditors and the ecumenical fraternal delegates contributed significant insights that helped to shape the Synod’s work.”

Archbishop Longley said: “Now that the list of fifty-eight propositions is complete, I feel it is right that we acknowledge the contribution of migrant communities to the new evangelisation – they play an important part in so many parishes in my own diocese.

“The focus on a more engaging catechesis in preparation for and following the sacraments, especially those of initiation, will provide a welcome stimulus to clergy and catechists. I am also pleased that we recognised popular piety as a significant pathway for many to deepen their faith and to draw them closer to the Scriptures.”

Archbishop Longley added: “In his address during the first week of the Synod the Archbishop of Canterbury, Dr Rowan Williams, encouraged an appreciative audience to be constant in keeping Christ at the centre of the Synod’s work.

“This theme re-echoed through many of the more than 400 interventions we heard, and it is reflected in the beautiful image of Christ the Good Shepherd that adorns the pectoral cross given to each Synod Father as the Holy Father’s personal gift.”

Archbishop Bernard Longley concluded: “As the Year of Faith enters its first month I believe the Synod on the New Evangelisation for the Transmission of the Christian Faith will have put fresh wind in the sails of each bishop as we return to our dioceses across the world. It has certainly given me a fresh perspective as I come home to Birmingham.”

Pope Benedict XVI Presided at a special Mass with the Synod Fathers in St Peter’s Basilica, on Sunday, 28 October, at the conclusion of the three-week XIII Ordinary General Assembly of the Synod of Bishops. The various language groups produced more than 350 propositions and the Holy See Press Office made public the final list of 58.

The Most Reverend Bernard Longley, Archbishop of Birmingham, pictured outside the Synod Hall in Rome with the Pectoral Cross, a personal gift from the Holy Father given to each of the Synod Fathers, on Tuesday, 23 October. The central image on the Pectoral Cross is that of Christ the Good Shepherd. The reverse embodies the Papal Coat of Arms and the date of the Synod, 7-28 October 2012.

By Peter Jennings in Rome