Adrian IV – The only English Pope 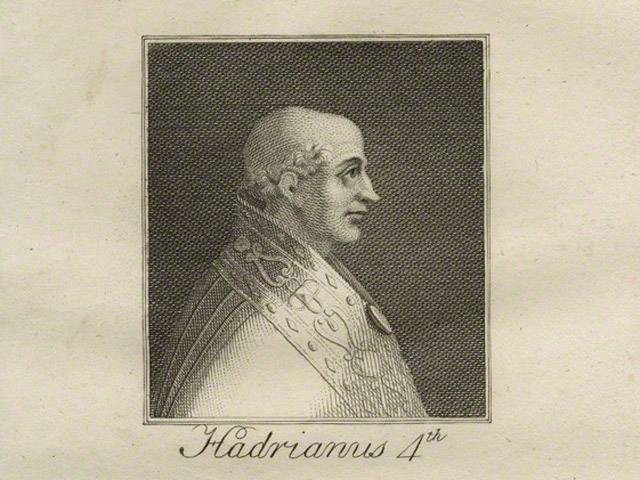 Nearly 1,000 years ago, in 1154, a man named Nicholas Breakspear was elected the first – and thus far only – English pope.

It is thought that his exact birthplace was Abbots Langley and that his father was Robert Breakspear – “a man of humble means, though of a decent stock”.

As a boy, Nicholas asked to be admitted to a local monastery but was turned away because he wasn’t thought to be highly educated enough.

Around 1125 he attended Merton Priory.

Nicholas was later to visit the monastery of St Rufus near Avignon, in south eastern France, and was asked to stay – eventually becoming its Abbot.

When Nicholas subsequently visited Rome on monastic business, Pope Eugenius III recognised his gifts and refused to let him leave – making him a Cardinal.

One of Nicholas’ tasks was to help establish the Church’s structure in Norway – establishing the archbishopric. When he returned to Rome, such was the success of his mission, he was hailed as the ‘Apostle of the North’. The following day, on 4 December 1154, Nicholas was elected Pope.

His time as Pope was challenging because of the activities of Italian barons. Arnold of Brescia actually took Rome, which was eventually returned to Pope Adrian.

William of Newburgh, in the North Riding of Yorkshire, an Austin canon and a historian of high repute (1136-98) wrote that Pope Adrian told a contemporary, John of Salisbury:

“The office of Pope, he assured me, was a thorny one, beset on all sides with sharp pricks. He wished indeed that he had never left England, his native land, or at least had lived his life quietly in the cloister of Sts. Rufus rather than have entered on such difficult paths, but he dared not refuse, since it was the Lord’s bidding” (Polycraticus, Bk. IV, xxviii).

A controversial act of Pope Adrian was a bull that allowed Henry II of England to annex Ireland to his kingdom.

Adrian was Supreme Pontiff for five years until his death in 1159. Witnesses claim that he died when he choked on a fly while enjoying a goblet of wine, but historian believe he may have died from a complication of tonsillitis called quinsy.