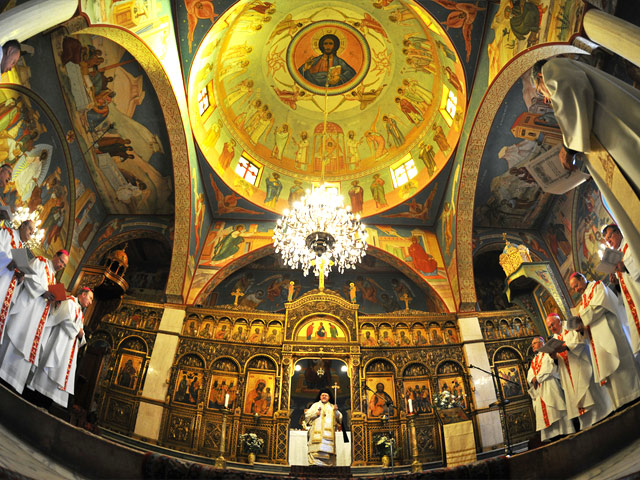 Your Beatitude Patriarch Theophilos III, and all distinguished members of the Greek Orthodox Patriarchate,

It is our great joy to come together as Catholic, Armenian, orthodox and evangelical churches, besides an International delegation of the Catholic Bishops’ Conferences in USA and Europe, to wish you a very happy Christmas. Our visit is not only a protocol gathering. We want to witness our brotherly communion, our desire for full unity and our common faith in the same salvation obtained by Christ through his Nativity in Bethlehem.

I am so happy to greet you in the name of:

To him and to all our Coptic brothers in Egypt we present our sympathy and condolences for the passing away of more than 21 martyrs from the church of the Saints in Alexandria. With all the Christians and the non-Christians of good will, who condemned this terroristic action, we join our voices not only for condemnation but also to pray that this event be the last one, and that the blood of martyrs becomes seeds of peace and interreligious tolerance and mutual respect in the Middle East. The same words we address on behalf of our brothers who fell martyrs in Baghdad for the same cause.

– I speak also in the name of the Syrian Orthodox Patriarchate, represented here by Archbishop Swerios Malki Mourad

– Bishop Mounib Younan, Evangelical Lutheran Church in Jordan and Holy Land, to whom we renew our congratulations for his election as head of the World Lutheran confederation. We are so proud of this nomination not only because bishop Mounib is our common friend, but also because he has a long ecumenical experience and knowledge of the Middle East, which he can and will invest in promoting the great cause of Christian unity. Bishop Younan, we express to you on this occasion our full support, appreciation and friendship.

With us there is an important delegation of bishops from USA, Canada and Europe. They came to be more informed about the situation of our communities and to show support to the cause of justice and peace in the Holy Land. They are important and influential figures in their countries. They are:

– Archbishop Patrick Kelly, Archbishop of Liverpool and representative of the Bishops’ Conference of England and Wales,

– Archbishop Rock Mirdita, Archbishop of Tirana-Durazzo and President of the Bishops’ Conference of Albania

Beatitude, as you know, a decade ago, we started organizing this Holy Land Co-ordination, with many Catholic Conferences, to meditate upon the issue of “Peace and Justice” in the Holy Land. Still, it seems that a decade is not enough to understand the situation, its ambiguities, challenges and frustrations. Peace and Justice, the solution to achieve such a big goal seems to be so obvious, though still so far and complicated.

Beatitude, Excellencies and dear Friends, our meeting here in this glorious Patriarchate, comes at a time, when the entire world is becoming tragically aware of what it can mean to live as a witness to Christ in these lands. The atrocious and absurd attack upon the Catholic community of Baghdad just after the end of the Synod, which left almost 60 people dead and many more horribly wounded, and now the New Year’s attack on the orthodox Coptic Church in Alexandria that killed 21 and injured so many more, have made the decision to stay even more dramatic than ever. Though the challenges that our people face here in the Holy Land are not exactly the same, yet these events struck our people as well.

Now, more than ever, we see the truth of what the Synod Fathers wrote in their propositions to the Holy Father, that our calling to be bearers of peace, “means sharing the cross of Christ.” We also wrote: “Amidst a world marked by division and extreme positions, we are called to live communion in the Church staying open to everyone.” Clearly this is a calling beyond our human strength at times. It is only the grace of God present in our communion with Him and between us that can help us embrace this mission as a precious gift.

In their names I express our happiness to be here as brothers sharing the same faith and filled with the same joy coming from the commemoration of the birth of our Lord. I will quote an important father of the Church, saint Leo the Great who stated in one of his Christmas homilies in Rome the reason why we should be happy on Christmas despite the many reasons of sadness coming from persecutions and sufferings. He wrote: “Our Saviour was born today: let us be glad. For there is no proper place for sadness, when we keep the birthday of the Life, which destroys the fear of mortality and brings to us the joy of promised eternity.”

Then Saint Leo expresses his astonishment in front of the mystery of Incarnation: because the Word of God, through whom all things were made became man: he took on Him our humility without decrease in His own majesty. Because of his double nature, he is the one and the same Mediator between God and men.

Dear brothers, sharing the same faith in one God, one savior, and sharing one joy, I pray the Lord that our communion increases, our daily dialogue and charity become stronger so that we reach one day the full communion and unity, not only in the heavenly Jerusalem but on this earth. This is the dream of 2 billion Christians. We bishops have a great responsibility to work for this noble goal through our prayer and action. Again I wish you all a very joyful Christmas and a blessed new year.

“This land is where Heaven meets Earth. The Churches in this land play a very important role, not just religious but also in the social and political field. The disasters in Iraq and Egypt where Christians were killed, not just because they are Christians but as fellow human beings, has brought to the attention of politicians the problem of fanaticism that prevents reconciliation, peace and co-existence.

“Our role is vital as it is to communicate the incarnate love of our Lord. Love can overcome obstacles and reach out to the heart of enemies.

“Jerusalem is not just a local parish; it is a universal parish. So far globalisation has not entered and Jerusalem maintains its spiritual purity and that is why it is important for the rest of the world.”

Mandated by the Holy See, the Holy Land Co-ordination meets every January in the Holy Land with the aim of acting in solidarity with the Christian community there and sharing in the pastoral life of the local Church as it experiences intense political and social-economic pressure.