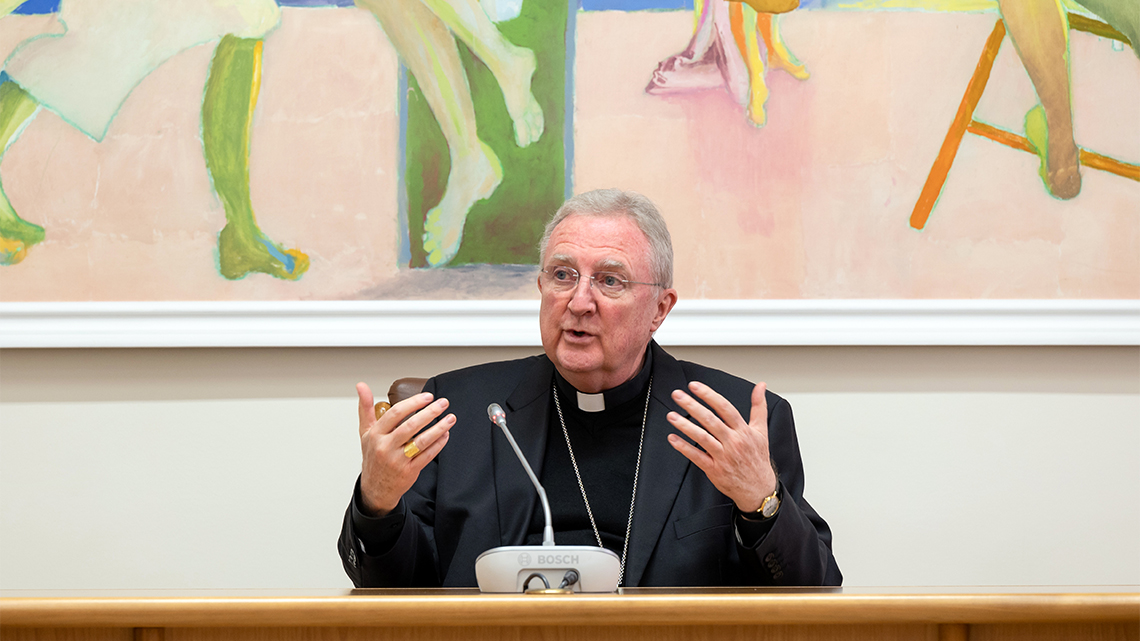 Future Cardinal Arthur Roche, Prefect of the Vatican’s Dicastery for Divine Worship and the Discipline of the Sacraments, suggests we must rediscover the sacred sense of Sundays, and as worshipers, when celebrating the liturgy, worshiping and praising God.

In a wide-ranging interview at the Dicastery, that we bring to you on the Solemnity of Corpus Christi, the English Cardinal-designate stressed this when reflecting on Pope Francis naming him cardinal and how he expects to assist the Holy Father.

In this conversation, the Prefect also reflects on recent debates about the liturgy and the Eucharist, noting “it’s a tragedy” because “the Eucharist is, by its nature, the sacrament that unites the entire Church.”

The Prefect laments the decline of religiosity, particularly in the West on Sundays, greatly due to secularization, and calls for a rediscovering the beauty of the liturgy and sacraments.

Cardinal-elect Roche also speaks about Pope Francis’ changes regarding the Latin Mass, clarifies what has been misreported, and reflects on the situation of the missionary Churches in the Amazon. He also addresses the universal sacramental identity of permanent deacons, but warns that they cannot be the answer to dwindling vocations in various regions of the world, because we would risk following into a “diaconal” Church, rather than a “priestly” one.

He highlights how ordained priesthood is key to the heart of the Church.

Reflecting on evangelization and worship, Cardinal-elect Roche recalls that “the strength for evangelization comes from the celebration of the Eucharist.” He also calls for rediscovering and recapturing the holy and sacred sense of Sundays.

Q: Where were you and what were you doing when you learned Pope Francis had appointed you cardinal?

Well, actually, I was fixing a fuse in the cellar just before the Angelus, which I normally listen to on a Sunday; I had a problem. So, I knew that the something had gone wrong and I went into the cellar to fix it. When I came back, both the house phone and my mobile phone, were going berserk. And the first call I picked up was from the Secretary of the Congregation [Dicastery], Archbishop [Vittorio Francesco] Viola. And he said to me, ‘Oh, Tanti auguri,’ you know, ‘many congratulations.’ And I thought he was talking about the Feast of the Ascension, which was being celebrated in Italy on that Sunday. So, I said to him, ‘Yes, buona festa (Happy Feast Day) to you also.” And he said, “No, no, you have been made a Cardinal.” “What?” [smiling]

Q: As Prefect of the Dicastery for Divine Worship and the Discipline of the Sacraments, and as an English future Cardinal, in what way do you expect to counsel the Holy Father?

Well, I would think that obviously the responsibility that I have as Prefect of this Dicastery, which oversees the liturgy in general, and also the matters of discipline pertaining to the sacraments that he would seek my advice about those things. But Pope Francis, you know, whenever we meet him, which happens not infrequently, he’s also very interested in your opinion about other things. So, we’ll see what happens because as a cardinal, you’re at his disposition and you’re there in order to help him and not to increase the weight that is upon him. So, we’ll see what happens.

Q: Turning to liturgy and reform. There have been many debates recently about liturgy, particularly the Eucharist. Why, in your view, does something that should unite us continue to be so contentious?

There have been opinions expressed about particular concerns. For example, very shortly after the chalice was withdrawn from Holy Communion for everybody who attended Mass, there was a controversy over that, but there’s never been a controversy about the liturgy in the way that we’re experiencing it today, partly because there has never before been two versions of the Roman Missal –the Roman Missal from 1962, and then the Roman Missal from 1970, which was produced with the full force of the Second Vatican Council behind it and promulgated by Pope Saint Paul VI.

It’s a tragedy that there is this controversy today, the so-called ‘battles’ over liturgy, because the Eucharist is, by its nature, the sacrament that unites the entire church.

And as the Holy Father has pointed out in his Traditionis custodes, there is one liturgical law which assists us in our belief in transmitting the Church’s doctrine. So, the reform of the liturgy is really a very important matter today and also not something to be taken as an option.

But one of the problems, challenges, of our age is the growth in individualism and in relativism, that ‘I prefer this.’ Well, the celebration of the Mass is not something to be a matter of personal choice. We celebrate as a community, as the entire Church and the Church throughout the centuries, as always regulated the form of liturgy that it has come to believe is more pertinent for a particular age.

Father [Jozef Andreas] Jungmann, an Austrian Jesuit who only died at the beginning of this century, was someone who, in his studies, showed how over the centuries the Mass has been changed in this way in order to fit the needs of the day. And the resistance to this is quite a serious matter, which the Pope has pointed out in his document on the liturgy, Traditionis custodes.

So, all that is taking place is the regulation of the former liturgy of 1962 Missal by stopping the promotion of that, because it was clear that the Council, the Bishops of the Council, under the inspiration of the Holy Spirit, were putting forward a new liturgy for the vital life of the Church, for its vitality. And that’s really very important. And to resist that is, is something that is really quite serious, too.

Q: Let’s turn for a moment to access to the sacraments following the Synod on the Amazon. Some expressed disappointment, suggested that it failed to resolve what had been termed as the sacramental crisis for missionary churches with vast territories and with few priests. Is this still a concern?

Well, there are two aspects there. One is the question of the shortage of priests. And I think that’s always been a reality, actually, throughout the history of the Church, that even in the Gospel, our Lord Himself foresaw that the harvest is great, but the workers are few. And the second question is with regard to the Amazonian usage of the Roman rite. In other words, the inculturation of the Roman Missal into the Amazonian culture. Well, that is something that is being worked on. But first of all, it has to be worked on by the so-called Amazonian Bishops in Brazil and in Peru, etc… So, they have established a Commission which is beginning to think about that. And that work will take some time, I think.

The other matter regarding vocations is something that always needs to be foremost in the mind of people, because the father of any community is the one who is responsible for bringing bread home to the children.

And so, the Eucharist is very much part and parcel of that. So that is another consideration that has to be looked at by the Bishops and indeed by the Holy Father himself.

But I think that where it does exist, it should really be well known. There are some pushes for deacons to be able to undertake other sacraments, for example, the Anointing of the Sick.

But that isn’t possible because with the anointing of the sick also comes the forgiveness of sins, which is personally the priest’s responsibility. So, it’s not very long since we had the Council, and a lot of these things take time to settle down. And I think that, in general, the role of the deacon is well understood. It is well accepted. It is a blessing for very many parts of the world, in which we’re living.

Q: And do you see it as a remedy to dwindling priestly vocations?

No, I don’t because if we were to replace the priest with the deacon, we become a diaconal Church instead of a priestly Church. But our baptismal identity is a priestly identity.

And the ordained priesthood is key to the confection of what is at the heart of the Church, which is the Eucharist. So I don’t see that as being the case, but I do see deacons as being of enormous pastoral significance and assistance to both priests and bishops in in many, many parts of the world.

Q: In your experience over the past few decades, what have been the greatest changes in religious practices?

When I was young, shops were never open on Sunday. And you very rarely played football, except perhaps in the afternoon. But the morning was sacrosanct because it was a general practice that everybody went to church and the ‘Domenica [Sunday in Italian],’ Sunday, for us is named after the Lord, the Lord’s Day.

And it’s something that we really somehow need to recapture. I think we could do that by increased catechesis and closeness to people. When I was a young priest, my bishop used to say that a people-going priest makes a Mass-going people. So, I think the closeness of the priest to his community is vital in this regard.

Q: Looking at secularization and liturgy, is there any connection between the two?

Well, secularization tries to diminish the importance of the divine, and we must be very careful about that, because when we go to church, when we celebrate the liturgy, we’re there to worship God. We’re not there to entertain ourselves or to entertain the community.

It’s the community who’s there to give praise to God for the gifts that He’s given to us, especially through His Son Who died for us and Who is made present in the bread and the wine, where, as fully-present body, blood, soul and divinity, He is in the Eucharist. So, we’ve got to be very careful, but we are living in a in a secular world.

And so, we have to be evangelists. And the strength for evangelization comes from the celebration of the Eucharist. So, at the end of the Mass, when the deacon says, ‘go in the peace of Christ,’ or the Masses end, and [says] ‘go in peace,’ or ‘let us now go to give praise to Christ by our way of life,’ in the world in which we live, he is sending us out to be evangelisers, to be catechizers in the world in which we live in. So that’s a very strong link with the two cultures, if you like, and one that can bring great wholeness to a secular society.

Q: What role can worship, play in the re-evangelization of de-Christianized countries?

Well, the Eucharist itself brings with it the doctrine of the Church. All the prayers that constitute the celebration of the liturgy on Sunday are mainly from the Sacred Scripture. Nearly always, nearly every word, nearly every nuance, is coming from Scripture or from the Teaching of the Fathers of the Church. So that itself, when you go to Mass, you’re receiving the doctrine of the Church. They used to say that Saint Bernard of Clairvaux in the 12th Century knew the Scriptures so well that he spoke ‘scripturally.’ I suppose our young people today would say he spoke ‘Bible’ [smiling]. Well, he received that because he was imbibing it. 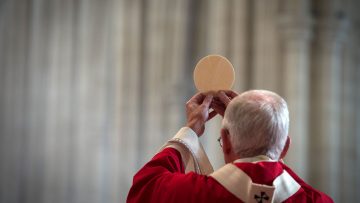