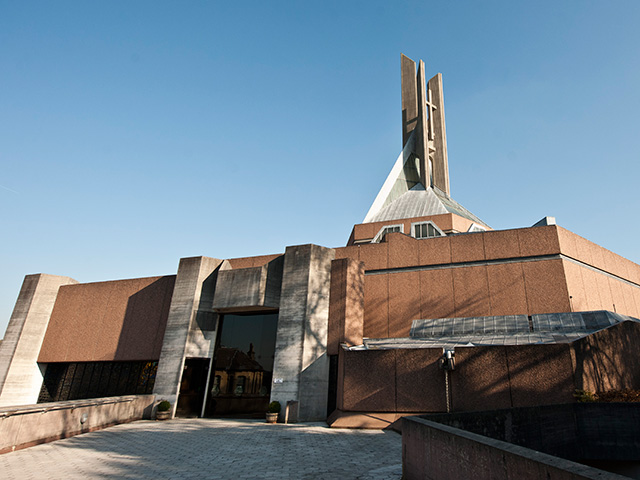 Clifton Cathedral, the iconic and award winning Grade II* listed building in Clifton Park, has been awarded £600,000 from the Government’s First World War Centenary Cathedral Repair Fund. It will be put towards work on its roof that is in urgent need of repair.

The award is a huge gift to Phase 1 of the roof repair project and with the support of the diocese and fundraising it will ensure that the replacement of the lower asphalt covered roofs will go ahead immediately. Fundraising will continue for Phase 2 of the roof repairs which will encompass the higher lead roofs and the steeple and ensure the whole cathedral roof is fit to last for many years to come.

The Cathedral celebrated its 40th anniversary last year, and is the Mother Church of the Clifton Roman Catholic Diocese. It has suffered from a leaking roof for many years which has begun to affect the fabric of the building and is all too often witnessed by the presence of buckets spread across the floor of the building.

The most important activity of the cathedral is the constant cycle of Christian prayer, day-in day-out, year-by-year, as a key part of the witness to the message of God’s Good News, and like any other busy Cathedral it is also the centre for many Diocesan activities and special services. The Cathedral hosts cultural events for the city such as concerts, lectures and exhibitions and the Bristol Doors Open Day. It also has a varied programme of World War 1 commemoration events that will run throughout the four anniversary years.

Bishop of Clifton, the Rt Rev Declan Lang said of the award:

“We are delighted to receive this award as the repairs are necessary for the Cathedral to continue to be a major place of Worship, and this really gives the roof appeal a great boost. The team behind the appeal and the bid have worked very hard and this will certainly help in attracting other necessary funding.”

The Dean of the Cathedral, Canon Alan Finley said:

“We are extremely grateful to Sir Paul Ruddock and his expert panel for this grant which will enable us to carry out the critical repairs to our roof that will ensure that our Cathedral will be preserved for the future and remain weather-tight, safe and open for all who use it.”

The Government’s First World War Centenary Cathedral Repair Fund was set up in April this year in recognition of the powerful symbol that cathedrals are part of Britain’s shared history, as well as the significant role they will play throughout the commemorations of the centenary of the First World War.

So far, 41 Cathedrals in England have received awards for vital repairs including Arundel Cathedral, awarded £200,000 that will be used to re-lead the south facing windows especially the beautiful St Philip Neri window designed by Nathaniel Westlake.

The Cathedral Church of SS. Peter and Paul is the Roman Catholic Cathedral in the City of Bristol. It is based in Clifton Park and is the seat of the Diocese of Clifton. It has been a Grade II* listed building since 2000.

Clifton Cathedral has a varied programme of World War One commemoration events that will run throughout the four anniversary years.