40,000 lapel crosses and prayer cards distributed for the Year of Faith 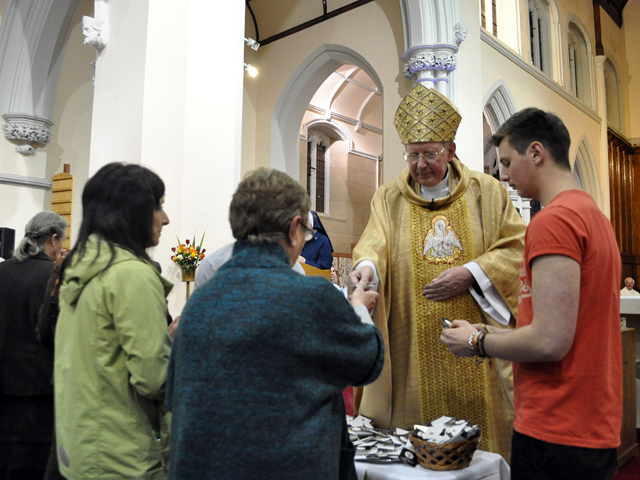 Around 700 people joined Bishop Séamus Cunningham, Bishop of Hexham and Newcastle, for a special Mass at St Benet’s RC Church in Sunderland on Thursday 11 October to launch the Year of Faith which Pope Benedict XVI has called to mark the 50th anniversary of the start of the Second Vatican Council and the 20th anniversary of the Catechism of the Catholic Church.

In preparation for the Mass, volunteers had prepared 40,000 lapel crosses and prayer cards. After the congregation had renewed their baptismal promises, crosses were distributed to representatives from the 180 parishes in the diocese who later collected packs of crosses and booklets containing information about events in the Year of Faith to take back to their communities.

In his homily, Bishop Séamus referred to the well-loved Northern Saints whose relationship with Christ had inspired them so powerfully to share it with others. Recalling the priests and religious who had taken the faith out into the wider world in his youth, the Bishop spoke of the changed emphasis drawn from the Second Vatican Council that clergy, religious and lay people now shared that responsibility. In fact, he pointed out, “lay people have a special vocation – they are now the ones mainly responsible for evangelising – that is to introduce people to the love and goodness of God who is at work in their lives and ours – to touch the world with our lives and transform it.”

Placing the Year under the patronage of Mary, the Bishop echoed the prayer in Ephesians, that God would give power for people’s hidden selves to grow strong and that, knowing the love of Christ, they would, with him, give glory to God “whose power, working in us, can do infinitely more than we can ask or imagine.”

The event was one of great beauty and joy and, even though many had found standing room only, the Mass ended with a sense of excitement and common purpose to make the most of the possibilities opened up by the Year of Faith. In the words of a young person who attended: “We got totally lost in the one-way system and ended up just looking for a church with its lights on – but I am so glad we made it! It was amazing to see so many people – brilliant!”

+Cunningham’s homily for opening Mass for the Year of Faith