11,000 People Celebrate 50 Golden Years for the Diocese of Arundel and Brighton at the Amex Stadium 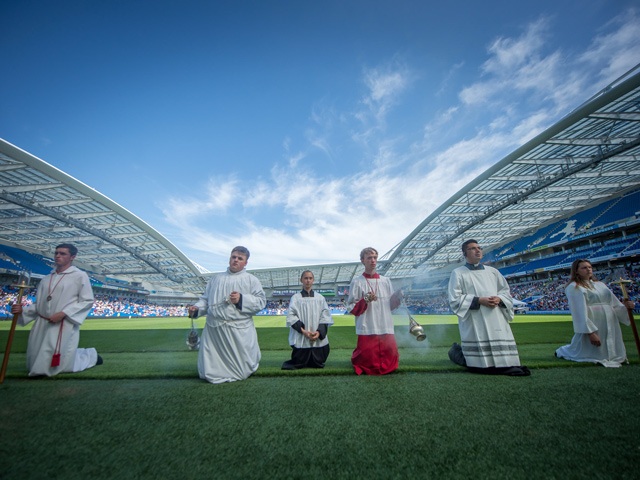 11,000 people from across Surrey and Sussex celebrated the Golden Jubilee of the Catholic Diocese of Arundel and Brighton at the Amex Stadium in Falmer, near Brighton, on Sunday 5 July.

It was the largest Catholic event in England and Wales since the visit of Pope Benedict XVI.

Bishop Richard Moth, recently Installed Bishop of the diocese, said in his homily:

“This is indeed a grand day for our Diocese as we celebrate 50 years since our foundation in 1965. It is truly wonderful to see so many from right across our Diocese gathered to celebrate our history, the Church that we are today and the future to which we look with hope and trust in the power of the Holy Spirit at work in his people.”

It was a wonderful day of prayer, faith, fun and friendship.

Alongside the key speakers Cardinal Cormac Murphy-O’Connor, former Bishop of the Diocese, Dr Rowan Williams, former Archbishop of Canterbury and Fr Timothy Radcliffe OP, former Master General of the Dominican Order we were also graced to hear Claire Dixon from CAFOD and Bishop Dan Turley from the sister Diocese of Chulucanas in Peru.

The stands and concourses were filled with 11,000 people of the Diocese and elsewhere who were able not only to see the many stalls and exhibitions but spend time watching theatre from Rise, dance displays from different cultural groups listening to music from Christian Rock band, The Sounds of Salvation, a local Mauritian band, and having a go on the Harris Brothers Vintage Fairground rides.

There was a dedicated Youth Stream for young people which began with a Youth Vigil the night before, an Ecumenical Walking Pilgrimage group who had walked all the way from Arundel, and dozens of school choirs.

The climax of the day was a Mass of Thanksgiving in the Stadium at 3pm led by Bishop Moth alongside the priests, deacons and people of the Diocese.

A mass choir of 800 singers including BBC’s ‘The Voice’ contestant, Stephen Bloy plus musicians led the celebration in song and music.

The choir included not only pupils of local schools, but adult choir members from across the Diocese making it one of the biggest choirs to gather in the South East this year.

At Mass, Bishop Moth said in his homily:

“It is incumbent upon us to take that love into the darkest places of our society, the places of desolation that we find in our own diocese and then into a wider world – for St. Paul reminds us in today’s second reading that ‘The footsteps of those who bring good news are a welcome sound.’ Today, it is our footsteps that are the welcome sound for an expectant, searching world.”

He went on to speak of the need for the people of the Diocese to be formed in faith, be a people of prayer and to go out in mission to the world to share God’s mercy. He concluded by saying:

“As we celebrate Jubilee, we look to the future with confidence. The task is indeed great, but it is in our weakness that we find strength. There is no need for fear, therefore, but there is a need for prayer, for formation and a wholehearted response to the call to Mission that is the life of the Church. Let us, then go forward in hope, ever more closely conformed to Christ, who is with us always; yes, to the end of time.”

dabnet.org
Official portal for the Diocese of Arundel and Brighton

flickr.com/photos/catholicism
We have a photo album from Festival 50 on our Flickr photostream