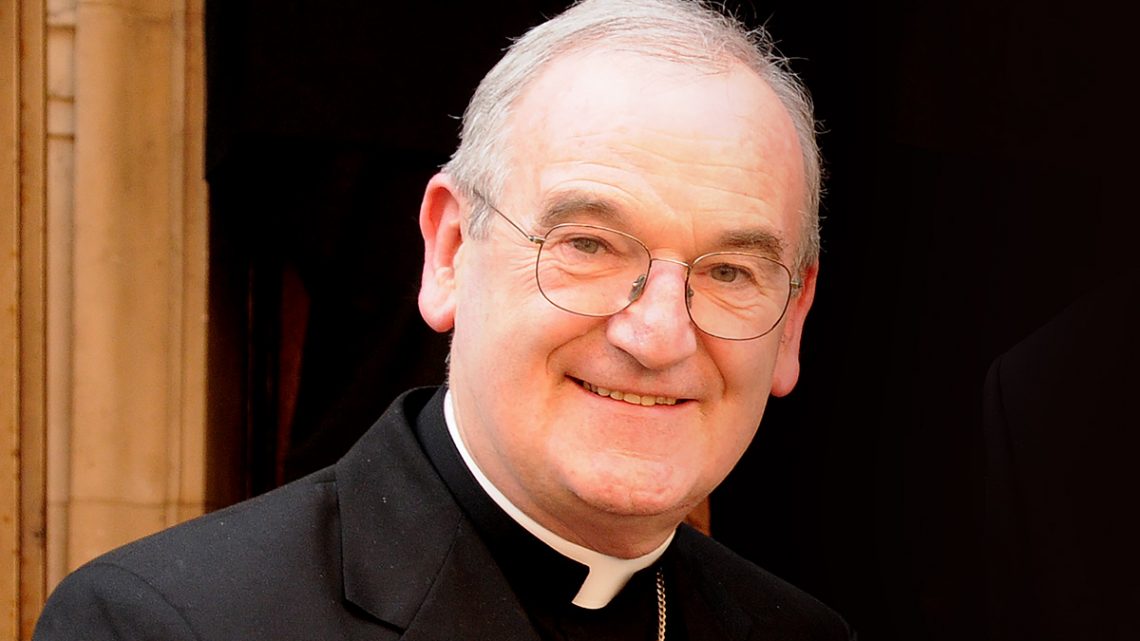 Auxiliary Bishop of Westminster, George Stack, has given an address at The Church of England General Synod on Wednesday 9 February 2011. Bishop Stack spoke about the Anglican Roman Catholic International Commission (ARCIC) report, ‘Mary, Grace and Hope in Jesus Christ’ saying that “questions raised by a study of the report are equally legitimate for Catholics as they are for Anglicans.”

The full text of his address is below:

“Many of you will remember the extraordinary scenes in Rome at the funeral of Pope John Paul II in April 2005. Among his many strong, identifiable, rock like characteristics was his devotion to Mary, Theotokos, Mother of God, God Bearer. He caused consternation when he became Pope and broke the rules of heraldry by insisting on having the letter “M” on his Papal coat of arms instead of an heraldic device. He regularly referred to his Episcopal motto as a sign of his devotion to Mary “Totus Tuus” — Totally Yours.

Perhaps surprisingly, it was this Pope who was noted for his devotion to Mary who wrote in his document on Church Unity “Ut Unum Sint” in 1995: …. “the Virgin Mary, as Mother of God and Icon of the Church …. is one of the areas in need of fuller study before a true consensus of faith can be achieved”.

Was this not one purpose of the Anglican Roman Catholic International Commission’s work which began in 1970? Its latest phase concluded in 2005 with the Seattle Agreement “Mary Grace and Hope in Christ”. The subject of Mary had been addressed once before, in the ARCIC statement on Authority in the Church in 1981. The fact that Mary found a place in the theological and historical minefields of the document on Authority, and not just in devotional literature, is an indication of her important role in understanding how the salvation achieved by Jesus Christ is communicated to each individual believer and also to the community of the Church as a whole. This was the deliberate intention of the Second Vatican Council when it placed its reflections on the role of Mary in the unfolding plan of salvation in the document on The Church “Lumen Gentium”. It is in that context that I would like to reflect with you on the Seattle Agreement document “Mary, Grace and Hope in Christ” published jointly by the Anglican Communion and the Pontifical Council for Christian Unity in Rome.

The authors give the purpose and status of this document quite clearly in their introduction: “The authorities have allowed this statement to be published so that it may be widely discussed. It is not an authoritative declaration by the Roman Catholic Church, or by the Anglican Communion, who will study and evaluate the document in due course”.

“Study and evaluate the document in due course”: is this very far removed from those words of Pope John Paul I quoted earlier: “The study of Mary is one of the areas in need of fuller study before a true consensus of faith can be achieved”? The Seattle statement itself seeks to do this when it says “In framing this statement, we have drawn on the scriptures and common tradition which predates the Reformation and Counter Reformation …. At the same time, we have had to face squarely dogmatic definitions which are integral to the faith of Roman Catholics but largely foreign to the faith of Anglicans”.

The sentence which brought joy to my heart said “We have sought to embrace one another’s way of doing theology” because it invites each of our communities to move away from static historical positions. Using the tools of biblical language, theological methods and even devotional life to seek to understand how the living faith of the Church is moulded by our understanding of the place of Mary in the Mystery of Faith, the saving action of Jesus her Son.

That is why, as a Catholic bishop, I welcome the properly “critical” nature of the series of essays by the Faith and Order Group of the Church of England. The neuralgic points of the Catholic doctrines of the Immaculate Conception and Assumption of the Blessed Virgin Mary are examined in those essays through the eyes of scripture, the Fathers of the Church, the place of Tradition and now the authority of the Magisterium is exercised by the Pope and Bishops. I realise that these are all loaded words. John Paul’s “fuller study before a true consensus of faith is found” needs to engage critically with the evangelical conviction that the sinlessness of Mary somehow removes her from the need of the whole human race for salvation, makes her somehow “less” of a human being is focused on the text from Romans 3:23 (all have sinned and fallen short of the glory of God). Realised eschatology is the creative tool which explores this seeming conflict when applied to the two Marian doctrines. The status of Tradition in interpreting the scriptures, and whether it diminishes or distorts the primacy of the Word of God is a legitimate evangelical concern.

Contrast the conviction of John Henry Newman that “it is not the assertion of an individual Father of the Church that carries weight, but their common testimony by which they witness to an apostolic tradition” with the weight placed in some essays that individual Fathers had dissenting views on the sinlessness, virginity and obedience of Mary. The doctrines of the Immaculate Conception and Assumption of Mary may sometimes seem to distort or misunderstand the role of Jesus as the unique mediator between God and the human race. An example of such a distortion would be the development of a theology which places her as an intercessor by the side of her Son.

And the degree to which these dogmas and their teaching on virginity, sinlessness and obedience in the life of Mary have affected an understanding and role of women in the life of the church mentioned in the Faith and Order Group Response need to be explored in the historical context in which the dogmas were proclaimed. A changing understanding of sin and the need for redemption when these truths were under attack from an atheistic and reductionist politique was certainly an influence on Pius IX in his proclamation of the Immaculate Conception. The doctrine of the Assumption in 1950 might be viewed in the context of a totalitarian crushing of the dignity of the human person by Fascist and Communist regimes.

These questions raised by a study of Mary Grace and Hope in Christ are equally legitimate for Catholics as they are for Anglicans in an exploration and explanation of the two doctrines on Our Lady and the light they shine on her life and the whole drama of salvation as lived out in and through the Church. Today’s debate is even more significant in the light of last week’s announcement that the third phase of the ARCIC dialogue will begin in May on the subject of “The Church as Communion – Local and Universal”.

To listen to the address, please visit the Church of England website: