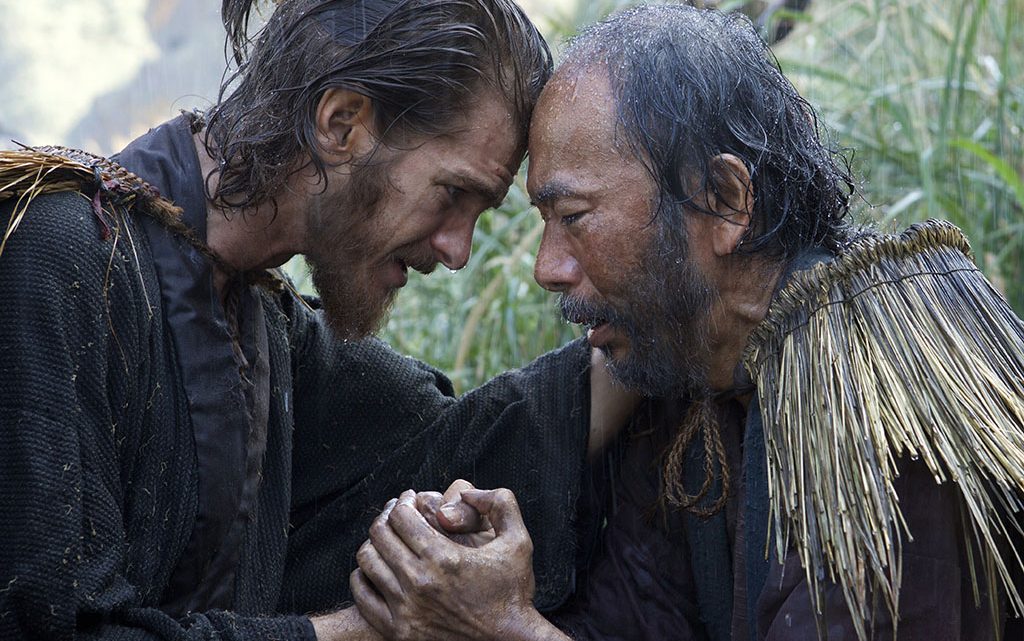 Director Martin Scorsese’s film Silence was released in cinemas across the UK on 1 January 2017. It tells the story of two Portuguese Jesuit missionaries who travel to seventeenth century Japan in search of their missing mentor at a time when Catholicism was forbidden in the country.

Signis, the international Catholic association for communication that promotes a culture of peace through the media, has released a statement on the film.

Silence is Martin Scorsese’s version of Shusaku Endo’s novel, Silence, which had already been made into an award-winning, Cannes-screened, Japanese film, Chinmoku, in 1971.

Scorsese wanted to make his version for 25 years but, until now, had failed to raise sufficient finance.

Scorsese is often quoted as stating that he is a Roman Catholic, first and last, and that he has seen his role as film director as akin to that of the priest, incarnating transcendent values in his films.

Scorsese has explored Catholic themes in only two films, Who’s That Knocking at My Door (1968) about a young Catholic man with problems in New York City. And now, Silence.

At a time when so many people have lost interest in religion, questioning it as well as questioning faith in God, the Catholic Church is treated with some scepticism and, because of abuse scandals, priests considered with hostility, it is a surprise to find such a deep exploration of the priest and priesthood in 2017. But, it must be stated that Silence is also a film about Catholic laity.

Of course, Scorsese is very well known for his Jesus film, The Last Temptation of Christ (1988) – not a Gospel film as such but an interpretation of the Gospel stories and Jesus’ humanity and divinity according to the novel by Greek Orthodox writer, Nikos Kazantszakis. As regards religion, Scorsese made the fine film about the Dalai Llama, Kundun (1997).

Scorsese was born in 1942 and the Catholicism that he grew up with, an Italianate New York Catholicism of the 1940s and 1950s, has been absorbed by the director. He turned 20 at the time of the first session of the Second Vatican Council but he seems to have moved away from day-by-day Catholicism at this period and his later comments and reflections do not echo the renewal instigated by Vatican II. In many ways, Scorsese’s Catholicism is a past Catholicism.

This is evident in Silence, in its portrayal of the Jesuit priests, their missionary endeavours, the persecutions, torture and executions. The ethos of martyrdom is that of the period of Scorsese’s childhood and adolescence, a long tradition of heroism in giving up one’s life for the faith, witnessing to faith in suffering and death, reinforced at the time by the Church’s experiences in Eastern Europe, Czechoslovakia, Hungary, and the well-known stories of Cardinal Mindzenty in the 1950s.

In fact, the first two hours of Silence (and it is a long film running for 160 minutes) play as an appeal to the Catholic ethos of the 1940s and 50s. It could take its place alongside such films as the version of A.J. Cronin’s The Keys of the Kingdom (1943) with Gregory Peck as a missionary in China. Martyrdom is based on conviction, courage, identification in suffering and death with the passion of Jesus.

The film opens with some vivid re-creations of the execution of Jesuit priests, observed by fellow-Jesuit Father Ferreira (Liam Neeson) who writes a record of what he has seen and what he has felt. These executions occur in 1633. However, his record is delayed in reaching his Jesuit superiors and, in 1640, two earnest young priests, Father Rodriguez (Andrew Garfield, who excelled in 2016 in Hacksaw Ridge) and Father Garrpe (Adam Driver who excelled in 2016 in Paterson), volunteer to go to Japan to search for Father Ferreira.

What Scorsese presents in the first two hours, echoing Endo’s exploration of faith, is a sympathetic portrait of two earnest priests, their ministry to the Japanese laypeople who have survived persecution, hidden in villages in the vicinity of Nagasaki, who welcome the priests, eager to have Mass and the opportunity for confession, and keep the priests hidden. The priests respond earnestly, the screenplay giving them many lines of reflection on their evangelisation, to spread the Gospel teaching – principally a Gospel of love – on their spirituality as Jesuits, the love for the Gospel stories which they quote with further, and the person of Jesus, their prayer.

It will be interesting to hear Jesuit responses to the film – and there have been significant films about 18th-century Jesuit missionary activity in The Mission (1986) with its South American settings and Black Robe (1991) about the missionaries in French-speaking Canada in the 17th century, at the same time as the action of Silence. Jesuit media personality, Father James Martin, appears in the credits as a consultant, other Jesuits from Taiwan (where the film was made), including strong SIGNIS presence, Father Jerry Martinson, are listed as well.

The priests, who come from Portugal via Macau, refer to the work done 100 years earlier by St Francis Xavier, to the Spiritual Exercises for their discernment in decisions and, the prayer of Father Rodriguez is very strong in his identifying with Jesus in the Gospel sequences, the composition of place recommended by St Ignatius Loyola.

It has been noted that this is a film about laity and the convert men and women are prominent in their living of their faith, sacramental life, support of the priests, and their willingness to suffer for their faith – including a long and harrowing sequence where four men are tortured, crucified at the water’s edge, and partly drowned as the waves and tides sweep over them. “Why are their trials so terrible – and our answers so weak?”. There are other sequences of torture and execution which are powerful reminders of the reality of this suffering (suffering which we can read about and absorb but which can be shocking when presented visually on screen).

So, in 2017, in the first two hours, we have a film which is a new dramatisation of older Catholic styles, Scorsese contributing to a re-awareness of Catholicism.

It is in the final 40 minutes that the film moves its audience, faithful as well as non-Christian, sympathetic or not, to consider questions about priesthood that have arisen since the Vatican Council. The word that is used throughout the screenplay, which we are not used to using in Christian circles now, is ‘apostasy’.

The Japanese authorities, originally sympathetic to the coming of Christianity, but then moving towards persecution, assertion of Buddhist traditions, and pressure on the priests to give up their faith, all Christians being asked symbolically to step, physically, on a religious image or to spit on the crucifix, refusing being “the most painful act of love performed”.

These temptations for the priests to give up is a reminder of the key theme of The Last Temptation of Christ, Jesus being asked to come down from the cross and live an ordinary life, the last temptation being the temptation to ordinariness. In this case, for the priests to become Japanese citizens, absorbing Buddhist traditions, studying science and language, with wives and families.

The appeal to the priests is different from that to the peasant Christians: the priests are asked to renounce their faith so that the prisoners might be set free. Father Rodriguez spends a great deal of time in prison, witnessing the torture of the Christians, mental anguish as he prays, the temptation to give in for the sake of the lives of those who are to be killed. He hears the voice of Jesus himself “I know and share your pain, your life is with me now”, sometimes looking at the image of Jesus – at one stage, on the run, looking at his bedraggled reflection in a pool and seeing the face of Jesus. He has his own Gethsemane as the authorities pressurise him and bring in Father Ferreira, who had been Father Rodriguez’s inspiration, but who has made the decision, after torture, to renounce Christianity and the church.

Does the film suggest that the ‘no greater love’ is not necessarily laying down life in death but in sacrificing one’s own life in living so that others may live?

One of the villagers who brings the priests to Japan, whose family have been executed but who has survived, seeing himself as a Judas (and frequently being a Judas) but who wants to confess and to be forgiven, challenging Father Rodriguez who does give him absolution to wonder how Jesus could love this kind of man.

Since the 1960s, many priests and religious have moved to lay life after years in vows. This is a theme that has preoccupied Catholics for almost half a century in a way that was not so explicit previously. Silence raises the issue of commitment to vocation, challenge to vocation, mental and emotional pressure, the experience of feeling “forsaken” intellectual arguments, and the crisis of conscience of renunciation to save others’ lives. Father Rodriguez uses the language of the “fallen priest”, “lost to God”.

A parenthesis: in the 1955 film based on the trials of Cardinal Mindzenty in Hungary, The Prisoner, the Cardinal is given some lines about what he might say in his trial, that because of the torture, he may sound as if he is denying his faith, something he is truly committed to.

The film does not end as we might have expected and the audience finishes watching Silence silently, reflecting, puzzled, hopeful – especially with one final image of Father Rodriguez as he dies and his body ceremonially burnt in the 1680s.

Silence is a film of beautiful images on land and seascapes, dark and hidden sequences, and very much a film of words, articulated questions of faith, articulated prayers, and, towards the end, an emphasis on rational argument about religion, faith, comparative religions, the politics of Western powers in the 17th century and the reaction against them by the Japanese, and the challenging discussions about the nature of the faith, the possibility of doubt and the conversion of the Japanese, whether Christianity and Catholicism have actually taken root or are simply an adaptation, with sincere commitment, of long-standing beliefs and traditions.

It is asked whether the convert values the signs of faith, metals and pictures, more than faith itself. There are substantial discussions about the nature of truth, its universality, and its being relative in different cultures. There are discussions about transcendence and how this is absent from Japanese culture, using the image of the sun: Jesus, the Son, rising after three days whereas the sun, sacred to the Japanese, rises daily in ordinary life.

Silence is not going to be a big box-office success. Initial reviewers who have commended this exploration of faith and a sense of God and God’s absence remark that the film was often boring – and may well be to the wider audience. In that sense, Scorsese has made the film for himself, a reflection on his own life, his beginnings in faith, his memories of the year he spent in the junior seminary in New York City and the example of the youth minister priest who inspired him, of his moving away from the institutional church, of his life and career, of his deep-seated interest in the basic themes of sin, guilt, repentance, suffering, redemption. There is hope in the screenplay with the laypeople talking about Paradise, hopeful of an afterlife, which has to be better than the impoverished and persecuted life they are living here on earth.

thinkingfaith.org
A review of the film from Thinking Faith, the online journal of the Jesuits in Britain.