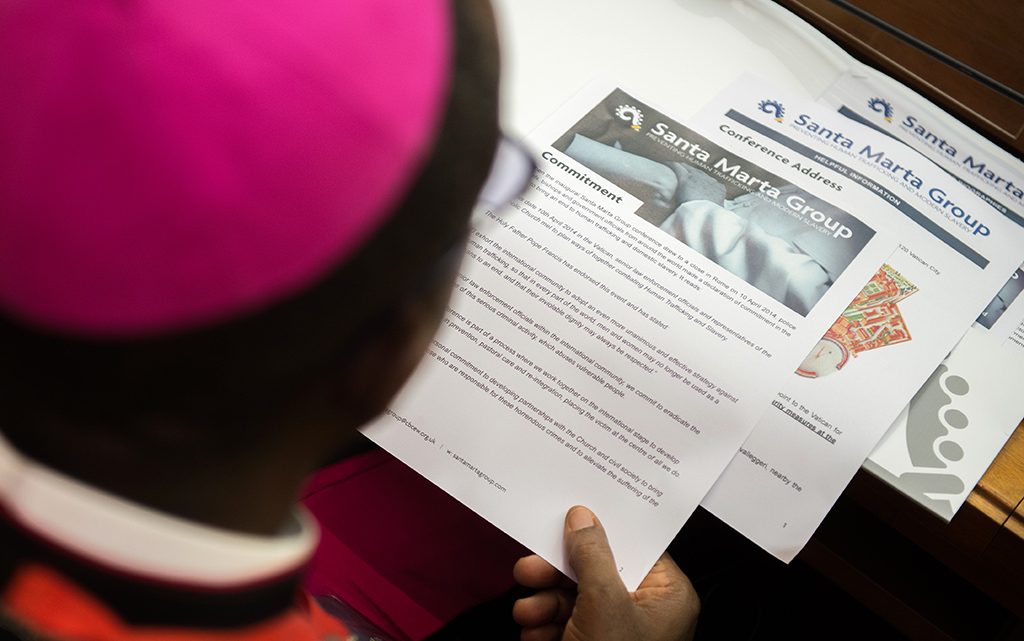 Senior law enforcement officers, Bishops, religious women and key international organisations are meeting together for the fifth Santa Marta Group conference this week in the Vatican to update and share best practise in the fight against human trafficking and modern slavery.

At this year’s conference over 30 countries are represented, including delegates from Africa, Europe, Asia Pacific, North and South America. The conference will have a regional focus enabling delegates to share tailored solutions to human trafficking within their geographical context. They will discuss the challenges they face and showcase the collaborative work the Church and law enforcement is doing to eradicate human trafficking.

Speakers include law enforcement officials from around the world, including Commissioner of the Metropolitan Police Cressida Dick and General Commissioner Nestor Roncaglia of the Argentine Federal Police. Cardinal Charles Bo, from Myanmar, and Cardinal Vincent Nichols, president of the Santa Marta Group are speaking alongside other Church leaders. The conference will also hear from key international organisations such as Jean Baderschneider of the Global Fund to End Modern Slavery. The conference ends with a Papal Audience on Friday.

This year the conference coincides with the feast day of St Josephine Bakhita, patron saint of human trafficking and who herself was a survivor of slavery. Cardinal Pietro Parolin will celebrate the feast with a mass in St Peter’s Basilica.

Launched in 2014 by Pope Francis and led by Cardinal Vincent Nichols the Santa Marta Group is a unique global partnership between law enforcement and the Catholic Church. Since 2014 the group has grown to become a worldwide network covering 35 countries.

“Slavery continues to affect the most vulnerable in our communities and the latest UN figures suggests over forty million people are now potential victims. This year’s conference hopes to build on the hard work produced by SMG partners since the group was established in 2014.The conference is an opportunity for law enforcement and the Church to share evidence of practical cooperation and effective responses driven by the importance of supporting survivors of human trafficking.

“Slavery is an affront to human dignity and we all have a responsibility to fight against it. This conference is a unique opportunity to strengthen our global response as we move to specific and accountable actions.”

@santamartagroup
You can stay up to date with everything that happens at the Santa Marta Group Conference to combat human trafficking and modern slavery by following @santamartagroup on twitter. Also check the hashtag #SMG18.